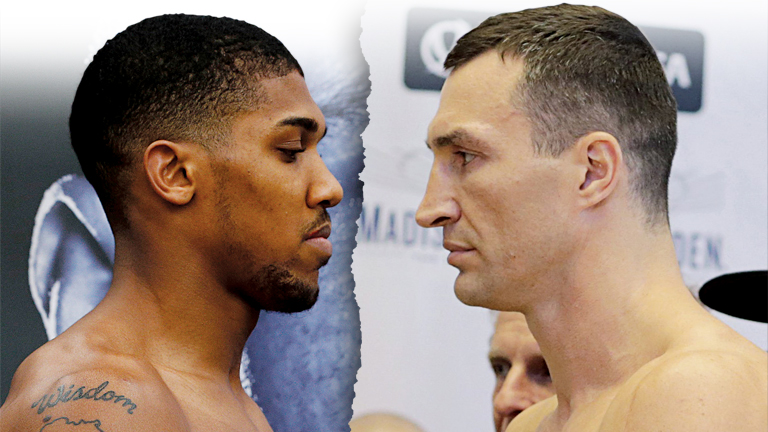 Matt Chrisitie analyses what makes Anthony Joshua vs Wladimir Klitschko such a superb heavyweight encounter. Bring it on in 2017

IT’S a trend of the social media age to harangue fighters, yet even the harshest and loudest armchair bandits would struggle to justify any criticism of this one. Too often in big fights this year, one of the combatants goes into the bout with ‘nothing to lose’, in other words given no chance whatsoever – think Amir Khan, Liam Smith and Kell Brook – but both Anthony Joshua and Wladimir Klitschko would enter combat with their reputations and careers in the balance.

For Joshua, it’s a real chance it’s a step too far. Ten months ago, following his rickety yet thrilling victory over Dillian Whyte, stepping up to this level was ruled out by his promoter Eddie Hearn. The faith in Boy Wonder is clear, yet all the British superstar has done since then is administer one-sided drubbings to opposition far below that of Klitschko’s standard.

Of course, Team Joshua’s desire is only part of the reason why this bout is under discussion. Just before Joshua defeated Whyte, the Ukrainian lost his world titles to Tyson Fury in a huge upset, and has spent much of the time since plotting his revenge. The IBF quickly stripped Fury, who then endured a horrible year, culminating in the relinquishment of his other titles following much publicised battles with cocaine, depression and VADA. Joshua has made the IBF belt his own and, with Fury unable to carry out his promise of a Klitschko rematch, reached out to the former king – inactive for a year and 40 years old. There are easier routes back for Wladimir, but he is fiercely dedicated, determined to prove he is not finished yet, and victory over Joshua would add a defining layer to his legend. At the back of his mind, though, he will be acutely aware that he might be about to lace up his gloves for the final time – which could make him more dangerous than ever.

THE fresh destroyer usually whips the creaky veteran. Go through history: Jack Johnson thrashing James J. Jeffries; Jack Dempsey battering Jess Willard; Rocky Marciano finishing old Joe Louis (not to mention defeating Jersey Joe Walcott, Ezzard Charles and Archie Moore); Larry Holmes humbling Muhammad Ali; in turn, Mike Tyson flattening Holmes before Tyson realised his best days were long gone when Lennox Lewis thrashed him in 2002. Of course Lewis, alongside all other victors mentioned, was far more advanced than Joshua. While “AJ” is 3-0 in world title fights, he is still effectively a prospect at the top level. In fact, when you consider that Joshua has started only 44 rounds, a number 24 shy of Klitschko’s total fights, this showdown is even more intriguing than your standard coming-of-age fare.

While Klitschko was made to look cumbersome by the unorthodox smarts of Fury, he might prove too crafty for 27-year-old Joshua. Back in the 1930s, the pre-title Joe Louis was a wrecking ball, destroying the likes of Max Baer and Primo Carnera until he fell to the educated fists of Max Schmeling; Klitschko’s idol had studied the young American carefully, and plotted the perfect game plan. George Foreman was considered invincible in 1974 until he came up against Muhammad Ali, and in 1992, the one-dimensional Ray Mercer was exposed by the ageing Larry Holmes. The key to victory in each of those cases was experience, and Klitschko has that by the bucket load.

It should also be noted they sparred as recently as 2014, with both complimenting the other afterwards. Immediately Joshua recognised Klitschko’s exceptional jab, but noted the ageing star might soon succumb to Father Time. Wladimir, meanwhile, was quick to pronounce the ever-studious Joshua as the heir to his throne. If the fight is made, expect that respect to remain throughout the build-up.

JOSHUA is clearly the man in form, but it doesn’t take a boxing wizard to recognise the level he has been operating at is a long way below his opponent. First of all, let’s look at the Englishman’s last few outings: In May last year, American veteran Kevin Johnson – a loser in four of his previous six – talked a good game, but was flattened in two rounds. The manner of victory was impressive in context, but Johnson was long removed from the contender status he flirted with in the last decade. Next up four months later was Gary Cornish. Another eye-catching early bludgeoning, but the Scot’s 21-0 record looked great but covered up a multitude of flaws. Since then came the aforementioned victory over Dillian Whyte, still arguably Joshua’s best win, when he briefly stumbled in the second before smashing his old rival in seven. The title-winning two-round victory over Charles Martin left the deposed champion nursing the reputation – perhaps unfairly – as the worst heavyweight belt-holder in history, while Dominic Breazeale also entered the championship standard woefully lacking in merit.

However, what Joshua has done time and again is win emphatically, exhibited improvements with each outing, and looks more than ready to be let loose at the highest level. It’s easy to pick holes in Joshua’s accomplishments, and is necessary to an extent when analysing a fight of this magnitude, but the Watford man has been developing at an impressive rate and his willingness to take this bout should only be applauded. Should Joshua destroy Klitschko – a perfectly feasible outcome – it will be an arrival that will transcend the sporting world.

FOR many, Klitschko’s loss to Fury was as much a case of time catching up with him as it was the Englishman’s intelligent tactics. It’s true he looked slow to pull the trigger, seemed uneasy letting fly with his vaunted power, and was tagged in close. While Fury should get the lion’s share of the credit for Klitschko’s poor showing, clues were already forming about Wladimir feeling the effects of time.

In 2014 he scored two largely one-sided stoppage wins over Alex Leapai and Kubrat Pulev, but he was also tagged cleanly and briefly wobbled by both.

While being punched in the face is nothing new in boxing, Klitschko had crafted a knack for avoiding it over the last 10 years. The untypically hurried manner in which he then flattened his two challengers, while worthy of praise, perhaps also illustrates he wanted them out of there before they had the chance to clout him again.

Those five-round triumphs were followed in April last year with a lacklustre 12-round points victory over Bryant Jennings. The American challenger was given huge props for lasting the distance – even elevated in independent world rankings in defeat – but his subsequent seven-round stoppage loss to Luis Ortiz showed he probably doesn’t belong among the elite.

Along came Fury and after 12 rounds, Klitschko was rightfully adjudged the loser for the first time in a decade. What we can’t be sure of, though, is how much Wladimir has left.

A man of high intelligence, it’s unlikely he would enter into combat with a fighter like Joshua knowing he was in sharp decline. He’s also a man of pride, one who would not blame his defeat to Fury on an injury should that have been the real reason for his failure to launch. Only Klitschko knows the answers, of course, and he will be asking himself some difficult questions before this bout edges towards reality.

Remember, to defeat Joshua, Klitschko does not necessarily need to turn back time. If he can identify one or two faults in Joshua’s armour, it might only take a single punch to shatter the young slugger.

FIGHTS of this magnitude are rarely easy to make. The IBF title was always going to be at stake given Joshua is their champion, but Klitschko has made it a condition that the now-vacant WBA belt is on the line too. It has been confirmed that they’ll fight for the WBA Super title.

While staging the contest for the UK television market was simple enough – Sky Sports Box Office would take responsibility – it was harder to resolve in the USA. While Joshua agreed a deal with Showtime long before this contest was likely, Klitschko has always been on HBO. The plan, then, was for Showtime to broadcast in the States, with a rematch, should one be required, to be shown by HBO.

That return is likely if the bout is a competitive one, with a rematch clause believed to have been drawn into the contract by both parties. However, while Klitschko recently stated he planned to fight on, it’s unlikely he will fight anyone – let alone Joshua again – if he is convincingly beaten. One senses the risk of such finality for Klitschko is a huge factor in the long and winding negotiations.

There was some talk that the bout may have been staged in Cardiff at the 80,000-seater Millennium Stadium, but promoter Eddie Hearn claimed the venue talked themselves out of a potential windfall by verbally agreeing a deal with David Haye’s team for December 10. With the O2 already in use, they tried to make it for the Manchester Arena this Saturday. It will now take place on April 29 at Wembley Stadium with the promoter looking to see what capacity the authorities in London will permit.

Money from the various ticket sales and broadcasting options could reach £30m, making it the richest fight in British boxing history, and it’s already been agreed that it will be split right down the middle.

This is a contest the sport, and the division, needs. Joshua and Klitschko, it’s over to you.