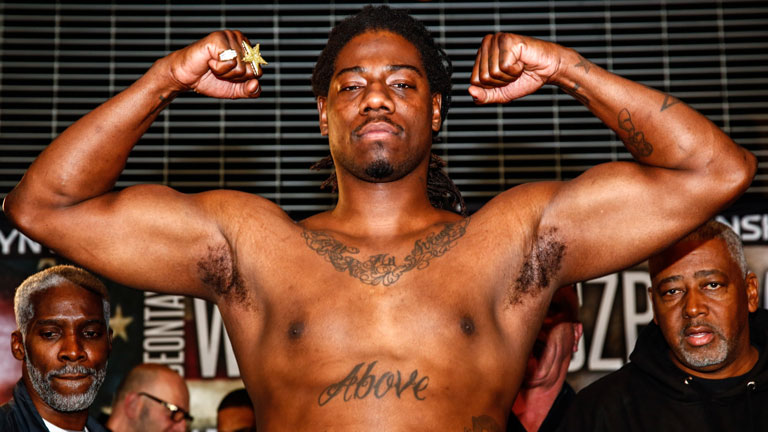 “PRINCE” CHARLES MARTIN may be jetlagged and tired, conducting his first non-TV interview since arriving in the UK this evening (February 18), but he knows exactly what his goals are. Ahead of Anthony Joshua vs Charles Martin for the latter’s IBF heavyweight title in London on April 9, the American tells me he plans to steal the Watford man’s fans and then meet his royal namesake.

“We can turn ourselves into superstars by beating him, take his fans, I wanna steal his fans,” Martin, from St Louis but based in California, explained. “Out here these people see boxing in a different light than the average American, who is too hung up on basketball and football. That’s why I wanted to come here, everything is done a reason.

“As of right now Charles Martin is very, very tired but I’m looking forward to April 9 and there will be a lot of fireworks. Maybe Anthony Joshua posted the George Foreman-Ron Lyle fight [on social media] because he thinks this is gonna be like that but he’s gonna get knocked out. I’m the better fighter, and the better man. The “Prince” will land, I’ll leave my mark there, then I’ll meet the real Prince Charles and show him my belt. That would be awesome.”

Martin, having come face to face with his challenger for the first time during filming for Sky Sports’ Gloves are Off show, elaborated on why he chose Joshua for his first defence.

“He was the next one available,” stated Martin, a polite and courteous man who admits he does not love interviews. “Tyson Fury and Deontay Wilder are tied up [against Wladimir Klitschko and Alexander Povetkin, respectively] so that was four guys out the equation, and Joshua was the next in line, the one everyone is talking about. He’s not really the talk of the town where I’m from but on social media and in the boxing world people kept mentioning his name, so we came to the conclusion we wanted him. I’ve watched a little bit of him and he’s a pretty decent fighter; that’s why we wanted him for my first defence, but we obviously see him as beatable.”