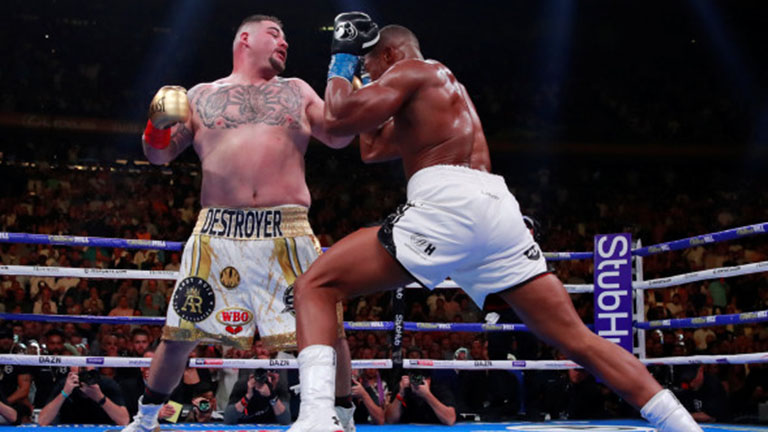 ANDY RUIZ JNR is the heavyweight champion of the world.

The man who came in as a replacement opponent at around four weeks’ notice. The man who was a 12-1 underdog. The man who didn’t fight for the whole of 2017 because he was working in construction and real estate. The man whose most high-profile victims beforehand had been aging veterans in Siarhei Liakhovich and Kevin Johnson. The man who wasn’t known as a heavy puncher. The man who was giving up considerable height and strength. The man who had lost his only previous world title try against Joseph Parker – a fighter whom Anthony Joshua then went on to handily defeat. The man who looks more like an armchair fan than a professional athlete. But looks, as they say, can be deceiving.

Outside of Ruiz and his team, not one person seriously gave the portly Mexican-American a chance prior to the bout at Madison Square Garden. Some people thought he might be able to make things awkward and uncomfortable for Joshua in the early stages perhaps. However, the general consensus was that the unheralded challenger would do well to get past the midway point against his celebrated, formidable, unbeaten foe.

Ruiz certainly did that… and then some.

It was in the seventh round – just past the midway point – that Ruiz achieved the most startling of victories. His very own Fairytale of New York.

By this stage of the contest, Joshua had already been dropped twice, both times in the third. Ruiz himself had been forced to rise off the canvas during this session, yet it was he who looked relaxed and at ease in his surroundings. Joshua, in contrast, his nose bloodied, was leaden-footed and breathing heavily – a giant Hercules monument teetering ominously on the brink.

Like a wrecking ball bringing down a Manhattan skyscraper, two knockdowns in the seventh completed Ruiz’s demolition job.

Hasim Rahman knocking out Lennox Lewis in 2001 was a complete shocker. Buster Douglas doing the same to Mike Tyson in 1990 was utterly astonishing. Andy Ruiz Jnr stopping Anthony Joshua in 2019 belongs in the same category as these two remarkable heavyweight turn-ups – some will even argue that it stands alone as the definitive upset in the division, possibly even the sport. What is unarguable is that the night will go down in history. The night that Andy Ruiz Jnr wrote his name into folklore. The night that the boxing world was turned on its head.