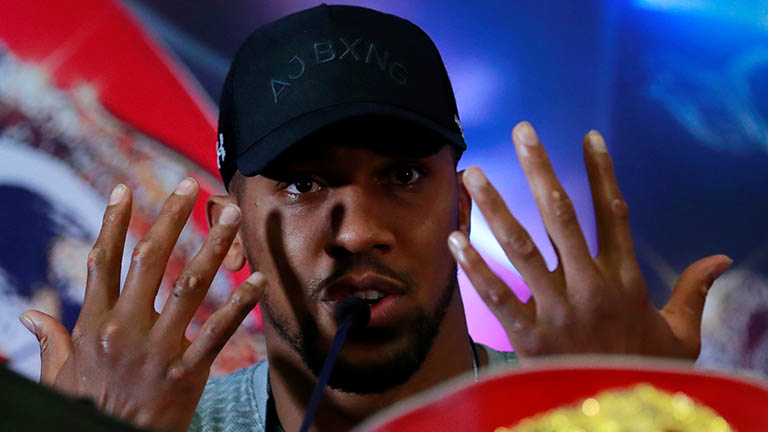 WHEN WBC champion Deontay Wilder revealed on Tuesday (May 28) that his next fight will be a rematch with one of his previous scalps, Luis Ortiz, the news did not go down well with Anthony Joshua, who holds the other three world heavyweight titles (WBA, IBF and WBO).

Just a couple of hours before Wilder made his announcement, Joshua and his promoter, Eddie Hearn, had been discussing the possibility of arranging a one-on-one, face-to-face meeting between the two unbeaten heavyweight titlists. With negotiations between the fighters’ respective camps so far having been fraught with acrimony, the hope was that a breakthrough could occur if Joshua and Wilder were to speak openly on their own. However, Wilder publicising his return bout with Ortiz put an end to this, for the time being at least.

“I said [to Hearn], ‘Ed, can I sit down with this guy [Wilder] and talk with him to see where he’s at?’” Joshua confirmed. “But you’ve seen the situation with Wilder announcing his fight with Ortiz, so that’s something we don’t need to speak about anymore, as we know what he’s doing next.

“I come from an amateur background, where I fought some of the best fighters in the world. You didn’t need to trash-talk in that environment. Wilder’s done a lot of talking. He did a great job of talking up the fight [between us], but it’s all irrelevant unless you back it up.

“At the moment, I’m fighting good fighters who are giving me problems and posing a risk. So I think to myself, ‘Why don’t I just fight Wilder, who’d give me problems and pose a risk, but would also offer a massive reward. I’d rather go down that route.”

Although Wilder’s decision to go over old ground with Ortiz has not impressed Joshua – “How would people react if I rematched [former victim] Alexander Povetkin next?” – the Brit stated that it wouldn’t be a disaster for his prospects if Wilder were to lose.

“It wouldn’t be a bad thing if Ortiz wins because I think he’d be quicker to fight me than Wilder,” the 29-year-old said. “It’s probably impossible for Wilder to stay champion for the rest of his time [in the sport]. He’s had close fights with Eric Molina, Tyson Fury and Ortiz. It’s coming close to a time when that belt should change hands.

“It’s not so much about Wilder anyway. A fight for the undisputed heavyweight championship is massive regardless [of who’s involved]. It could be [Andy] Ruiz [Jnr] against Ortiz – it’d still be massive. Even if he was to lose [to Ortiz], Wilder is a good name in general. He’s a credible, dangerous fighter. But it’s not about Joshua versus Wilder. It’s about the undisputed title. That title means a lot to me.”

Joshua’s recent talk of Wilder has led his upcoming opponent, Ruiz, to claim that the Englishman is overlooking him, which is something that “AJ” refutes.

“We’re close to the big night now [on Saturday June 1 against Ruiz in New York]. This big night will hopefully lead onto even bigger nights. The heavyweight division is one to be spoken about now, which is good. There’s Fury, [Oleksandr] Usyk, [Michael] Hunter, [Kubrat] Pulev, Dillian [Whyte]. Then you’ve got up-and-coming fighters like [Joe] Joyce and [Filip] Hrgovic. A good win against Ruiz will keep me at the top of the sport.”

With Wilder having produced an eye-catching showing against Dominic Breazeale less than two weeks ago, it has been suggested that Joshua is under pressure to deliver a similarly formidable display this weekend on what will be his US debut. The unified champ admits that he cannot afford to put on an average performance, though not because of any need to outdo Wilder, but rather due to a personal mission to do himself justice on the grand Madison Square Garden stage.

“My competition is with myself, [not Wilder],” Joshua argued. “I like Mike Tyson, American movies, American music and American sport. There’ll be a lot of American influence on Saturday night – I feel it in the air. That’s why it can’t be a flat night. I need to be clever, skilled and use my ability – show what I’ve been learning.

“I respect Ruiz for stepping in the ring. He’s been around for a long time and I know a lot about him and his coach [Manny Robles]. We should be in for a good fight. I’m going to try to limit my mistakes, but mistakes can make a fight interesting.”