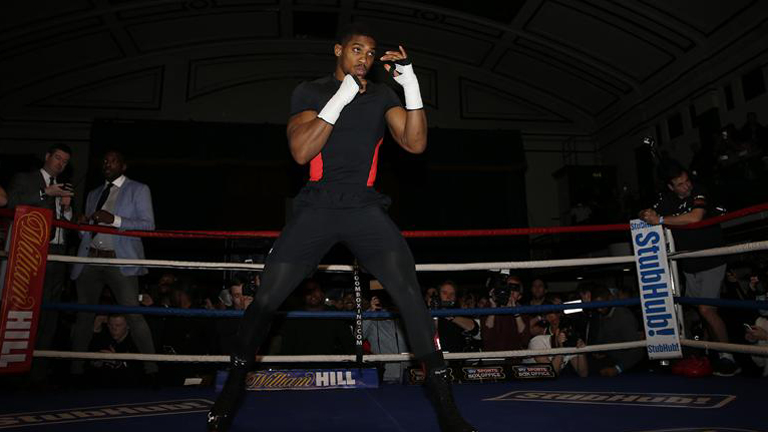 ANTHONY JOSHUA fighting for a world title was always going to be a huge event. But just how much attention it’s attracting became clear at the public workouts held at York Hall. The queue simply to get in stretched down the street out of sight and hundreds piled in to the venerable Bethnal Green venue to see the British heavyweight champion.

Another sign of whether a boxer has hit the big time is whether American nuisance Shannon Briggs arrives to hound him. Inevitably Briggs made a cheerful appearance, getting the crowd to chant his catchphrase: “Let’s go champ, let’s go champ.” Joshua happily emerged to meet Briggs, embrace him and receive his very own Shannon Briggs T-shirt. Only in boxing. Literally.

IBF heavyweight champion Charles Martin smiled thinly at the boos that greeted him as he walked to the ring. He may have played up to it, pointing at the crowd, talking, but he didn’t seem really to enjoy having to play the villain to Joshua’s hero. He shadowboxed, sidling round the ring, perhaps a sign that he plans to move from, rather than stand with, the Briton on Saturday at the O2.

It’s hard to read much into a public workout but Joshua undoubtedly has presence. He threw punches, shadowboxing before gloving up to hit the pads with Tony Sims.

His fans were happy to see him live, and Joshua worked the crowd afterwards, taking his time to sign autographs and pose for pictures like a politician on the campaign trail. He is running for office, in a sense. His bid to become a world heavyweight champion is only five days away.