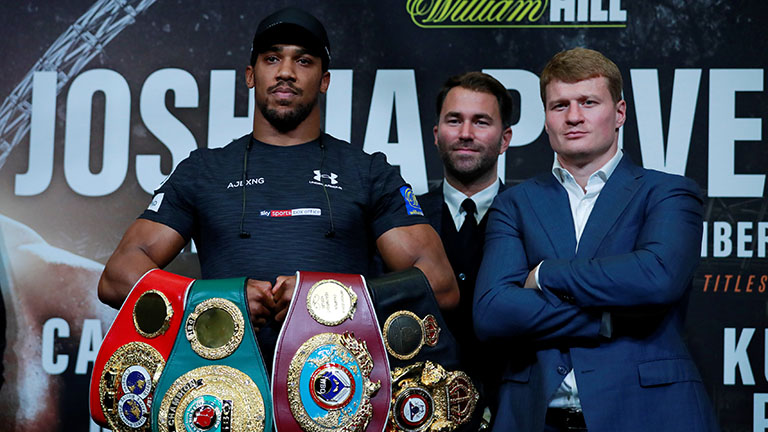 ANTHONY JOSHUA is feeling under “tons of pressure” as he nears the latest defence of his world heavyweight titles against Alexander Povetkin at Wembley.

The IBF, WBA and WBO champion is returning for the first time to the scene of his finest hour as a professional – last year’s dramatic 11th-round stoppage of Wladimir Klitschko – but does so at a time when he will be harshly judged.

That negotiations for a unification fight with WBC champion Deontay Wilder that ended in frustration led to Saturday’s fight with the less-glamorous Povetkin, his mandatory challenger and a significant underdog.

Tyson Fury’s return and swift agreement to a fight with Wilder has also led to wider criticism of Joshua, who in his last title defence against Joseph Parker in March was taken the 12-round distance for the first time.

Against his 39-year-old challenger, anything less than a convincing victory is likely to lead to further criticism, and Joshua said: “There’s loads of pressure; tons of pressure. That’s the reality.

“You’re calm and collected but underneath it all it’s the reality. We both know what we are in for. It’s the same with every fight.

“What more can I do than give my best? I’ll go out there and find a way to win.

“I know I have a lot of fire in my belly; that’s just as important as skills.

“Skills and technique apart, we both have a big heart and can dig deep. We both showed that against Klitschko (who Povetkin lost to on points).

“The one who’s toughest will come out victorious.”

Povetkin, like Joshua an Olympic gold medallist, represents the champion’s toughest fight since that against Klitschko.

He has since overcome Carlos Takam and Parker, when for the first time his performances were criticised, and his trainer Rob McCracken said: “(Povetkin) is a fighter from a different level. With respect to Parker and Takam, Povetkin comes from the top level.”

Similarly to their first press conference, Povetkin was again far smaller than Joshua.

It was a size disadvantage that contributed to his only defeat in 35 fights, by Klitschko in 2013, but he said: “Joshua is one of the strongest in the division. Anthony is a very strong fighter but I am just as strong.

“When I fought Klitschko I was much weaker and in worse shape than I am now.”