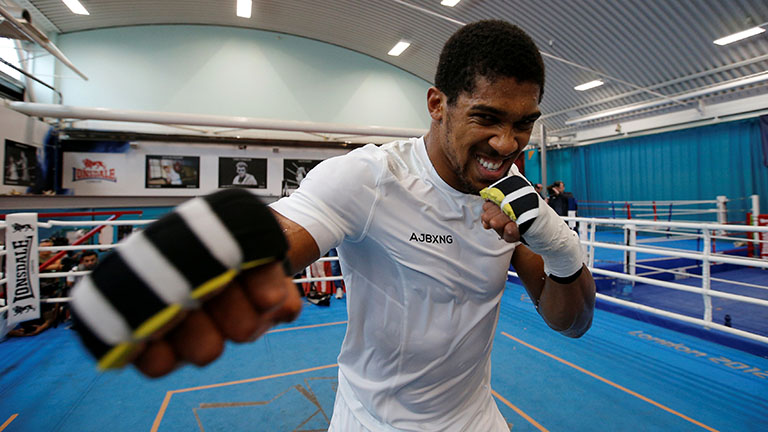 ANTHONY JOSHUA is not looking past the threat of Alexander Povetkin after insisting “one punch can change the course of history”.

Joshua will put his unbeaten record and WBA, IBF and WBO heavyweight titles on the line on September 22 at Wembley Stadium against a mandatory challenger who has only lost once in 35 professional contests.

While the lure of potentially career-defining bouts against the likes of WBC titlist Deontay Wilder and compatriot Tyson Fury have grabbed his attention, Joshua admitted he would be unwise to take his next challenge lightly.

Povetkin, who like his next opponent has won Olympic gold, will give away four inches in height and seven more in reach, which Joshua believes may pose problems.

He told Press Association Sport: “This isn’t a stepping stone. This is a proper fight. One punch can change the course of history. Povetkin knows what he’s doing. He’s a top-five heavyweight, I’d say.

“I’ve seen guys like Povetkin, they’re difficult, they’re strong fighters so I’ve got to be smart.

“He’s fought guys like me all his life, I’m not new and my size isn’t new to him. But I fight taller guys a lot of the time because the heavyweight division does breed a lot of big guys.

“He’s been fighting guys my height for so many years, so it will be easier for him, harder for me.”

Joshua was paired with Povetkin after a unification world title fight with Wilder failed to materialise, with both camps blaming the other for a lucrative showdown falling through.

Wilder now looks likely to take on former world champion Fury later this year in a bout that would be welcomed by Joshua, who feels like he has been flying the flag in the blue riband division for too long.

“Boxing needs these type of fights,” Joshua said. “I can’t be the one to do them all, I feel like I’m bearing that burden. It’s good that they’re finally stepping up and fighting each other.”

But Joshua, who holds a perfect 21-0 record with 20 wins inside the distance, will continue to welcome all comers and even refused to rule out a loss for either Wilder or Fury derailing their chances of facing him.

“They’re big fights,” Joshua added. “Wilder, Fury, Dillian (Whyte), (Luis) Ortiz, (Jarrell) Miller. All of them can get some, so I’m looking forward to all of them.

“I have to take them on. If one of them lose, it doesn’t define their career.

“They’ll bounce back and have a fight with me or something like that and it could be one of the great fights that everyone remembers.

“You can’t let one slip-up define your whole career because it’s about the long-term, not the short-term.”