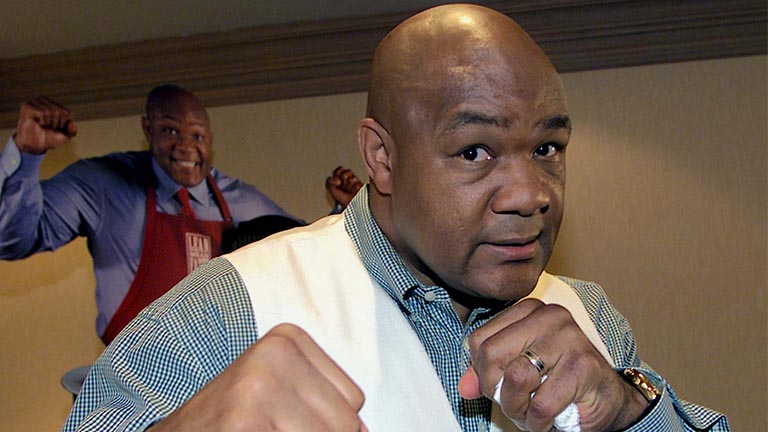 AS an exercise in a fighter utilising his physical attributes, George Foreman’s win over Joe Frazier in 1973 will likely never be surpassed. Foreman didn’t only design the ideal blueprint for a powerful heavyweight preparing to fight a smaller opponent, the plans he and his training team developed resulted in one of the sport’s most stunning demolition jobs.

In a worn ring in Jamaica, Foreman finally got to set the charges and the impact shook the sport to its foundations. Within two rounds, and a mere 21 months since “Smokin” Joe had defeated Muhammad Ali, Foreman had taken ownership of Frazier’s heavyweight title and the world had a new, seemingly unbeatable champion. But to focus on the brutal power shots which made Frazier hop, skip, and jump around the National Stadium in Kingston is to ignore the physical and mental groundwork that went into the stunning victory.

The rest of the world may have watched on in a state of bewilderment as the shorter, rotund Andy Ruiz Jr took apart the imposing Anthony Joshua, but Foreman instantly recognised what was going on.

“What happened was over confidence. The one thing that I had against Joe Frazier that I didn’t have again was extreme fear,” the two-time heavyweight champion of the world told Boxing News. “I had to go with the X’s and the O’s as far as training went. I took advice and had the great Archie Moore, Sandy Saddler, and Dick Sadler in my corner and I listened to every single thing they said.

“And I was afraid. Fear makes for a great champion. Joshua on the other hand didn’t think much of Andy Ruiz. He was also in the same situation as I was with Muhammad Ali in Zaire. When I got cut [causing a five-week delay to the famous Rumble in the Jungle], I should have packed up my bags and gone back home. When his fight with Jarrell Miller fell out, Joshua should have packed his bags and went back home as well.”

Before all that, Foreman bullied Frazier. Rather than moving away, pawing with a jab and giving the ever rolling Frazier space to build his famous momentum, Foreman kept the fight at the range he wanted by using his strength to turn and push “Smokin” Joe on to the back foot whenever he tried to close the distance.

Foreman displayed an innate understanding of how to first negate Frazier’s work and then turn his size into a disadvantage, but, for many modern heavyweights, dealing with mobile, quick fisted rivals isn’t something that comes naturally. And therein lies the problem. Finding smaller men to work with and fight will never be a problem, but finding good quality smaller men who understand how to make their size work for them has always been difficult and has become more of an issue in an era dominated by super heavyweights.

“To be honest, I’ve said it all along. Boxing is not a big man’s sport. We’ve had a few successful athletes who were big but it’s not their sport. It’s really a smaller mans sport,” Foreman said. “Go back to Joe Louis and even Ali, he wasn’t a big 6ft 3in guy. Not at all. Joe Frazier was smaller. Mike Tyson was smaller. The sport was invented for smaller guys to be able to defend themselves against big guys. When a big guy gets into the ring, he has to think defence first and then go after him. In my fight with Joe Frazier, I spent the first few minutes blocking and spinning him. Just moving him around to disable him.

“I had to use a master defence that night. Joe Frazier kept coming. He’d fought so many big guys that he knew how to fight us big fellas.”

Publicly at least, there have been positive signs in the way Joshua has reacted to coming out on the wrong end of one of the biggest upsets in recent heavyweight history. But for all the positive and media-friendly quotes about a renewed determination to right the wrongs and defeat being just a part of the journey, the image of Ruiz calmly picking himself up off the floor and returning fire after taking the type of shot that has decimated other men will surely haunt his quiet moments. In truth, one would think the thought of enduring another sustained body attack like the one the Californian subjected him to at Madison Square Garden will plague his thoughts.

Joshua has every physical tool at his disposal but his return seems set to be much more of a mental battle and, in Foreman’s eyes, it isn’t a task that can be accomplished within the space of a few months. Foreman isn’t advocating that Joshua follow his lead and take a decade-long break from the sport before returning to attempt to reclaim his crown but he is certain that a few months spent re-evaluating and rebuilding would benefit him much more than an immediate rematch.

“If I was Joshua’s manager, [I’d consider it’s likely that] in six months’ time all of those titles are going to be broken up again. Nobody expected it. Ruiz will be stripped of one or two of those titles in the next six months. You just watch. Joshua should go back to the drawing board. He’s a good fighter but let sleeping dogs lie. This guy beat him fair and square. Let him go back to the drawing board and fight a few guys with that height and style and then meet him maybe a year later.

“Don’t go right back. What for? Joshua lost the fight and that’s all we’re talking about. We still haven’t given a proper proclamation to Andy Ruiz yet.

“Joshua is the best fighter on the scene. Something went wrong that night, but he should take his time. Once you get knocked down like that, it takes time to get a cure for it. Take time off, regroup, get back into the gym and take your time. Then go after it again and start all over. He’ll be a champion again. No doubt about it.

“Joshua should get back into the ring in a few months and then get a few warm ups in. Forget about Ruiz. He doesn’t need him. Ruiz still needs him.”