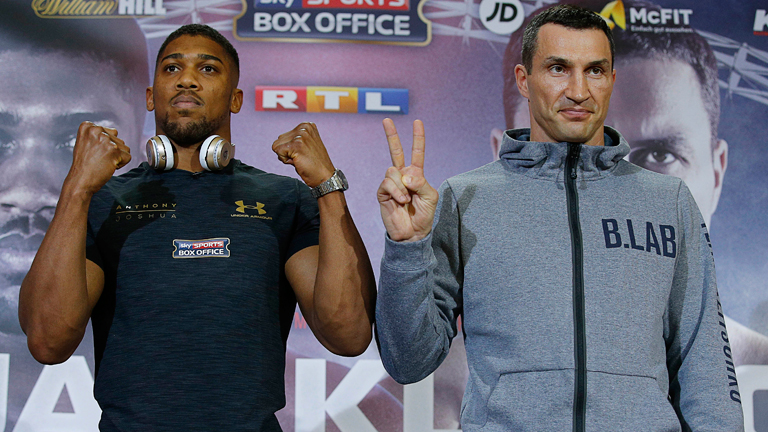 WLADIMIR KLITSCHKO is fighting to save his career against Anthony Joshua, and from all evidence so far, it’s bringing out the best in him. That may change the moment the opening bell sounds, of course, but for now the 41-year-old is making the most of every last second.

At today’s final press conference, in front of the world’s media – and layer upon layer of Sky staff who left their desks to fill every inch of spare floor space inside the Sky Centre – Klitschko stole the show as he dropped a Nostradamus-style bomb, and the world’s favourite Trumpism – “Fake News!” – with acute comic timing.

Klitschko entered first – as Michael Buffer announced list of impressive achievements – the familiar bombastic beats of Red Hot Chili Peppers’ Can’t Stop and – just for a change – fist bumped Joshua’s coach Robert McCracken, his promoter Eddie Hearn, and Sky’s Adam Smith. And then, like at last night’s workouts, watched without emotion as “AJ” made his entrance.

“I would like to make a very, very, very long speech,” said Klitschko. “But I will not do so.”

“Can you imagine my next opponent, which is ‘AJ’, and I’m going to fight a guy whose age is exactly how long I’ve been in bioxing. 27 years. Imagine that? Is it degrading that I am an underdog after all that time? I don’t think so, I feel great, I feel young and I feel totally obsessed with raising my hands and winning this fight.

“I realised that life is a cirle. I see myself in ‘AJ’. I know how he thinks where he goes, and what he’s going to do. I am not quite Nostradamus, but I know how this fight is going to go.”

Klitschko then unvieled a USB stick which will be sown into the robe he will wear on fight night. On it is a recording of Klitschko, and his prediction of the fight. The first person to see the prediction will be whoever buys the robe, which will go on auction and raise money for charity.

There has been a whisper that Klitschko suffered an injury to his eye socket in the build-up. When asked about it, the veteran paused before saying “Fake News!”, much to the amusement of all in attendance.

Joshua, though, remains completely unfazed. While it’s true that he appears to respect Klitschko more than any previous opponent, the notion that he’s showing signs of nerves or fear are wide of the mark. Joshua is happy to let Klitschko do his thing, to reciprocate the fist bumps, and show his respect. He knows that time, age, speed and agility are on his side. He can sense it.

“I just strip everything down to reality,” he said. “April 29 is just two guys having a fight.”

And to those who say he’s not ready?

“I could have said before the Olympics that I wasn’t ready, but let’s rock and roll. There is no fear, but I don’t underestimate any man. That’s put me on a pedestal.”