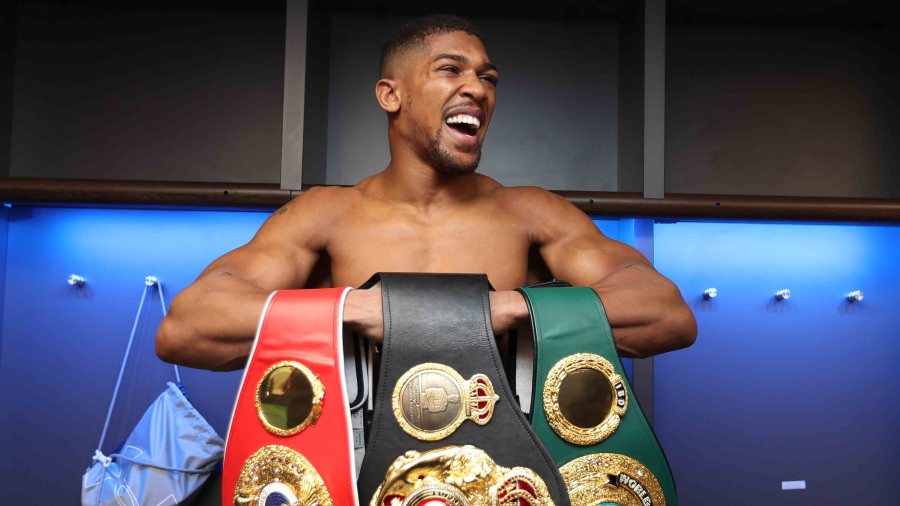 ANTHONY JOSHUA has set his sights on fighting a “real villain” as he plans his next move after overcoming Wladimir Klitschko in an epic showdown at Wembley.

Joshua added the WBA title to his IBF crown after stopping Klitschko in the 11th round in front of an estimated 90,000 crowd on Saturday night.

The 27-year-old will now have his pick of opponents to choose from as he looks to further establish himself as the world’s leading heavyweight.

A rematch with Klitschko is a possibility, while WBC champion Deontay Wilder has already said he would relish a unification fight, but it is an all-British showdown with Tyson Fury that would most capture the imagination.

Whoever Joshua comes up against next, he admits he would like to face a “villain”.

The Briton, whose fight against Klitschko was a played out amidst a backdrop of mutual respect and civility, told the Guardian: “At the end of the fight they (the British fans) cheered Wladimir but, yes it would be nice to fight a real villain.

“We can definitely find someone to dance with again, to bring that sort of attention again. Anyone with a belt is good, to add more to the (collection). We could rematch Klitschko again.

“I think that would be good because of the type of fight we had. And I think even guys without a belt would be good. Tyson Fury obviously hasn’t got a belt.

“(Fury represents) a fight that would bring massive attention from the top to the bottom.”

Fury has not fought after beating Klitschko in November 2015 and last year he surrendered the titles he won in that fight to focus on his mental health problems.

It remains to be seen when, or if, Fury returns to the ring but both he and Joshua have been actively urging the other to make a potential showdown between the two undefeated heavyweights become a reality.

A rematch with 41-year-old Klitschko is also a possibility for Joshua and would prove a similarly lucrative and high-profile option to facing Fury.

When discussing a potential return with Joshua, Klitschko – whose points defeat by Fury in 2015 means he has lost twice in succession – insisted he had a rematch clause he could choose to exercise.

Klitschko inflicted a first knockdown of Joshua’s career with a devastating right hand in the sixth round of Saturday’s clash, but in the 11th the Ukrainian suffered his second and third knockdowns of the fight before being stopped on his feet – potentially reducing his desire for a rematch.

Joshua said: “I think he will want to (fight me again) because a fighter is the last one to know when it’s time to stop. But I think the team around him, ie his wife, and they normally wear the trousers, and his brother (Vitali), they will advise him differently.”