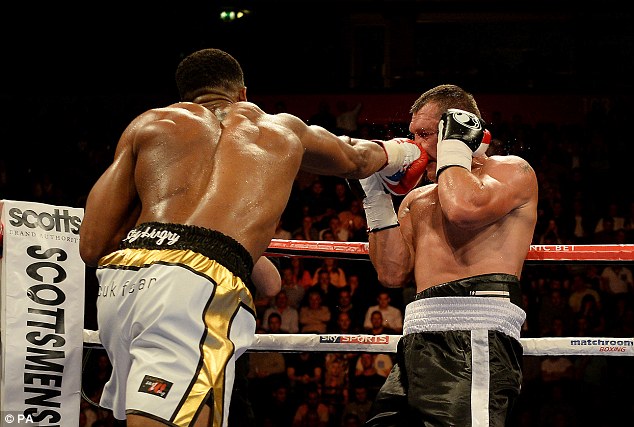 WELL, Scott Quigg defending his version of the WBA super-bantamweight title successfully, more or less went as expected, although it only lasted into the third round.

Stephane Jamoye put in a sturdy resistance, digging in body shots, and keeping Quigg on his toes, but Scott was not going to be denied his victory and broke Jamoye up with his own body punching that seemed to have a bigger effect. He went down from a shot to the body in the third round, and although he rose referee Terry O’ Connor called a halt. He may have been able to carry on but I think Terry will have used his experience as an ex-professional, and known from Jamoye’s body language that he didn’t want to, he had had enough.

There was a similar finish to the English title between Scotty Cardle and Kirk Goodings although I thought at first the stoppage after just 46 seconds was somewhat premature. And after looking again I still thought it was premature. The punch that put him over was to the body, he rose at the count of eight and the referee told them to box on. Scotty powered forward and caught Kirk with a couple of glancing blows to the head, causing his to cover up on the ropes, then duck down and sway left to right, upon which referee Steve Gray stopped the fight. Well I used to sway left, right, then left again, and sway back bringing a left hook out of my small bag of tricks, which normally missed. 46 seconds, the first round, I personally, rightly or wrongly, would have given him the chance to recover. I feel Terry O’ Connor recognised the signs from Jamoye in his stoppage, but Kirk was not given the opportunity to dig himself out of the hole he found himself in. Less than a minute had gone, he was still strong and went over from a body shot, so apart from a pain in the bread basket, he had all his eggs at home, and I would have given him the chance to give it a go for what maybe his only ever chance of a title.

Another early finish came when Anthony Crolla and Galamiel Diaz shared a technical decision, when the latter sustained a bad cut to the eyebrow before the end of the fourth round. I think myself it is a very good rule – I wasn’t sure when it came out but as time has gone on I find myself in agreement. Diaz, a former WBC champion, showed a good array of punches with body shots and uppercuts, and it looked a pretty even contest. A lot was made of Diaz being 33 years of age but with the knowledge of proper diet and training schedules he is surely still a force to be reckoned with. I hope a return can be arranged when his eyebrow has repaired – it looked really good match up.
I can’t miss out Anthony Joshua. He did what was expected of him and in style. I am not one of the people that want him thrown to the lions, let him toddle along, picking up experience, slowly raise the standard of opponent, because he has a long future in front of him. Taking for example the finish… Konstantin Airich went down, and as he sat there, Joshua hit him with another shot and he could have been disqualified. This is another part of his learning curve and if he had another referee that wanted to make a name for himself he could have found himself at the wrong end of a disqualification, which in context of the rules would have been a perfectly legal.
Another really god show, much better viewing then staying up to watch Floyd Mayweather.