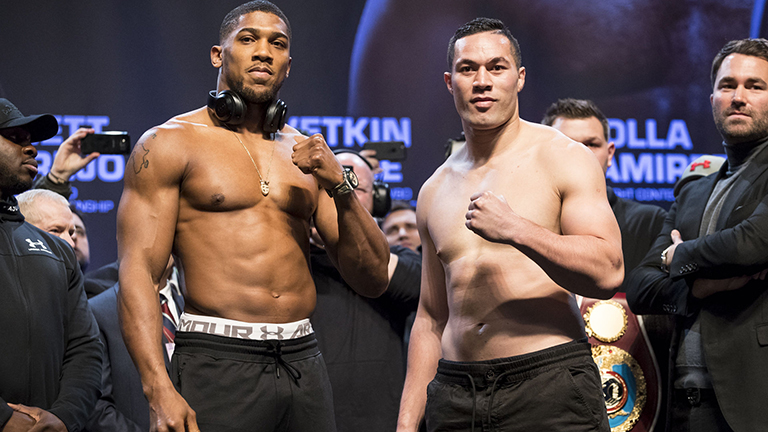 DAVID HIGGINS is by no means a typical boxing promoter. No one before has managed to gatecrash, and be ejected from, their own press conference. Conducting a video presentation on Anthony Joshua’s alleged “glass jaw” was also a left-field move. But ultimately he ended up getting his man, Joseph Parker in the ring with Joshua in front of an 80,000 seat stadium and on a blockbuster pay-per-view broadcast. And Higgins points out that Deontay Wilder needs to learn something from his approach.

For, despite these hijinks, Higgins was very aware of something. “Let’s be honest, Joshua’s the A-side, he’s a commercial juggernaut, he’s the only man in boxing who’s regularly filling 80,000 seat stadiums. Him and Eddie Hearn have built that. Who’s Wilder to want 50 percent when he hasn’t even sold out his hometown arena? We wanted a good deal and we got a deal but we were also mindful of not being so greedy that they couldn’t do the deal. And that’s what’s happening with Wilder. It’s not Joshua dodging Wilder, it’s that the Wilder side are so outrageously cynical and greedy that they’re killing the deal,” the New Zealander tells Boxing News.

He believes that Wilder most likely will fight Joshua next year, because if he doesn’t the winner of Joseph Parker versus Dillian Whyte (who box this Saturday on Sky Sports Box Office) will be there, waiting in the wings for the biggest star in boxing.

“Of course it’ll happen. It’s [Wilder’s] first big payday. It’ll happen when his expectations come back down to earth. Until then, Eddie Hearn will keep calling his bluff. Why should they allow Wilder to take a pound of flesh more than he deserves when he hasn’t achieved half of what Joshua has and they’ve got other good options. If Joshua beats Povetkin, the winner of Parker-Whyte is a sitter, could be plugged straight into Wembley and sell Wembley out. So they don’t need Wilder. I’d say Wilder and his team are almost risk averse. If they think they’re going to beat Joshua, why do they need 50-50? It’s almost like they see it as their one shot to grab as much money as possible,” Higgins says.

Outside of Luis Ortiz, Higgins reckons Wilder has a “padded record”. “That fight [with Joshua] will happen and it will happen only when Wilder’s expectations come back down to earth,” Higgins continued. “What’ll happen is after [Alexander] Povetkin, if Joshua wins, if I was Eddie Hearn, I’d engage with the Wilder people again. I’d quickly find out are they realistic or not. Wilder’s going to worry that they’re going to lose the opportunity altogether, so they’ll be under pressure. So there’s a high chance Wilder’s people will take a haircut, pull their head in and make the fight, otherwise risk waiting another six months. That could well happen. And if they piss around again, then Eddie could easily call their bluff again and just make a deal with the winner of Whyte-Parker, it’s there as a sitter.

“Eddie Hearn and Joshua are the A-side and they hold all the cards in the negotiation and the Wilder-Al Haymon-Shelly Finkel side will come under increasing pressure as time goes on. If I were Joshua and Eddie Hearn, I’d ignore this rubbish about Joshua dodging Wilder, they’re just using that to try to steal money off Joshua basically that they don’t deserve. They’re trying to steal money off Joshua that they don’t deserve.

“They haven’t earned it, Joshua has.”