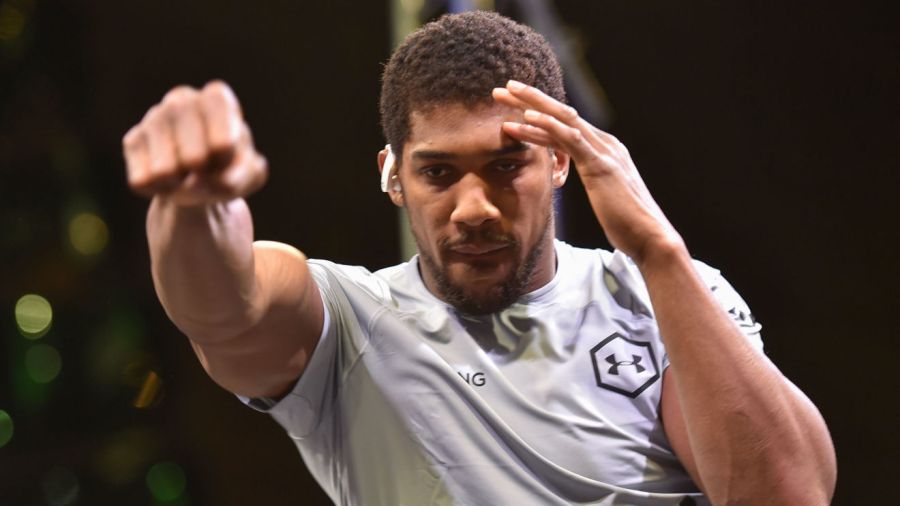 Speaking to the UK media via Zoom, Anthony Joshua reflects on life in lockdown and growing through adversity, and looks ahead to his homecoming fight against Kubrat Pulev in front of 1,000 fans

YOU’VE been out of the ring for a year now. Although lockdown has obviously been hard in many ways, has it been beneficial for you to step out of the pressure cooker?

Lockdown has been tough for everyone. Everyone’s waiting to be able to socialise again, and we’re slowly getting there. But if you think, when I turned pro I was straight away selling out the O2, and with that there’s pressure. Building the sport as well with my companies, which have done a great job, has meant putting myself forward. With them shut down during the pandemic, I’ve been able to spend my time training. I’ve lived these months as an athlete and it’s been a blessing, as I’ve progressed a lot.

Following the longest layoff of your professional career, could there be a danger of ring rust when you fight Kubrat Pulev?

Oh definitely. This year has just thrown every obstacle at us all. That’s what makes this fight so interesting. I might go in there feeling a million dollars, saying that I’m going to be the undisputed champ, then I end up getting my head punched in because I’ve got ring rust. So who knows? But I feel good. I’m looking forward to it. I haven’t boxed in such a long time but that’s why in lockdown I’ve done a lot of training – physical and mental. I’ve done a lot of sparring – getting my body tough again, getting punched up. Sometimes in sparring, I’ve been thinking to myself, ‘I’m going to take this round off and let this boy punch me up, because I need to get tough. I need to get that thick skin.’ That’s the best way I can prepare and I hope it comes to fruition on December 12.

Pulev is a potential banana skin, like Andy Ruiz Jnr turned out to be when you fought him the first time. Is that defeat buried in your past or does it still motivate you?

I feel like the Ruiz defeat is buried for me because I made no excuse, I took it and I dealt with it six months later [by winning the rematch]. Knowing what losing was like and not wanting to go there again has definitely made me tougher – it’s given me that motivation. I want to prove to myself how good I’ve become over this last year – being in lockdown and training like an athlete. I want to see what the benefits of training this year like a true athlete have done for me. Pulev is experienced and he’s got a good jab, so I’m going to have to be ducking and diving, slipping and sliding. I can’t just be straight-up and stiff. I’m going to have to adopt an elusive style as well. I’ve had to work on all these tactical aspects, so I’m looking forward to seeing where I’m at.

Your rematch victory over Ruiz came in Saudi Arabia. How was the experience of fighting there?

I think it was a great success. For me, losing the belts and then winning them back, that’s my success. I focused on the training camp and winning the fight. Winning my belts back was a massive success for me because I was under a lot of pressure. You’ve seen it recently with Daniel Dubois – he has so much potential but one loss can really upset the apple cart. With the Ruiz rematch I knew I just couldn’t afford to lose. I had to go to Saudi, box to a strict game plan and win my belts back. That’s what I did, so I feel it was a great success for me. In terms of the event itself, it showcased Saudi as a country that is hospitable to people from all around the world, so I think they were really happy.

Can you see yourself fighting there again in the future?

There was great hospitality in Saudi, and great feedback, so it’s definitely an option. I’ve been away for over two years but I’m back in the UK now and I want to stay here for as long as possible. When I first turned professional I had offers from America and Germany, but I knew the UK was where I wanted to be. I’m clear on that – this is where my base is and this is always my priority. But fighters also have to travel. There’s a sense of trailblazer and road warrior, so I don’t mind getting on the road anymore. I did it last year and I’ll do it again. I definitely want to go back to MSG [Madison Square Garden, New York] where I took the loss to Ruiz, so that’s on the cards.

How do you feel about being back in London for the Pulev fight?

It’s perfect. There’s that familiarity. I started here at Finchley ABC, then went up to Sheffield where I’m based now for training. I’ve fought at York Hall, the O2, Wembley, Cardiff, Newcastle… I’ve been dotted all around the UK. It’s comfortable, as I don’t have to travel anywhere. It’s good to be here. It makes it easier.

You must be happy that 1,000 people will be in attendance, rather than having to fight behind closed doors?

It’s the whole production element – boxing during lockdown just hasn’t been the same without the fan reaction and the noise. At the same time, I’ve enjoyed it. It’s been fun to sit back and watch it. The fighters [who have boxed behind closed doors] have adapted well. But it’s going to be nice for the people [at the fight], because when is there ever going to be another chance to witness a heavyweight championship fight when there are only 1,000 people in the room? It’s going to be intimate, it’s going to be a closed-circuit crowd. You won’t have to worry about your missus having a pint of beer chucked on her head! Or 15 guys by the side of you getting into a fight. It might be nice for the spectators.

When was the last time that you fought in front of a similar-sized crowd?

The last time I fought in front of a small crowd? I think it was Hungary [at the Bocskai tournament in February 2012]. I fought [Sergey] Kuzmin and someone from Uzbekistan, a big guy [Sardor Abdullaev]. It was quite decent, you know. It’s not bad. The pressure is off, you can get into your rhythm. I think I need that sometimes – I’m under a lot of pressure. I’m physically good but mentally you have to stay strong. This year has been good to unload a lot of pressure, and fighting in front of 1,000 fans is not so bad. You have to take it as a positive and control what you can control. One thousand fans are allowed in and I can’t add to it or take from it. I’m going to go in there and perform with no pressure and showcase the styles that I’ve merged together, which are sticking and moving, and aggression and knockout power.

You were first scheduled to face Pulev three years ago, but an injury ruled him out. At 39 years of age, do you think he has declined during this time?

In terms of Pulev, three years ago might have been too early for me. I’m more experienced now. I’m wiser. I’ve lost a fight and I never want to lose a fight again – I know what that feels like. Pulev is wiser as well, though. With age comes experience and I’m going to be in there with a man who’s mentally strong and experienced. As we’ve all seen with the likes of Alexander Povetkin and Wladimir Klitschko, and Mike Tyson and Roy Jones, age is just a number.

You say you’re wiser and more experienced now, so do you think that Pulev missed his chance three years ago?

I was thinking about this the other day. I went through a lot of my career not even knowing what I was doing. I was just fighting. I watched the [Eric] Molina fight the other day, I watched a bit of the [Carlos] Takam fight, I watched the Klitschko fight and I was like, ‘Wow, how was I in these type of fights with the little bit of experience that I had?’ Looking at who I am today, I like to reflect a lot and I think, ‘I was just a pup [back then], a little puppy.’ I feel stronger now. I feel smarter and it’s the same thing I say with the other guys that I want to fight. The longer they leave it, the tougher it’s going to be for them, because experience is the best teacher and I’m gaining so much experience every day that I step in the gym.

One of ‘the other guys’ is your fellow world heavyweight champion, Tyson Fury. If the fight between you two does happen next year, do you think it could be held at Wembley Stadium?

It’s always for the fans. Management teams and promotional teams are going to do right by what is financially viable as well – what is going to get Fury to step in that ring, what is going to get me to step in that ring. It’s a balance. Damned if you do, damned if you don’t. The main objective is getting this fight done. There’s definitely the element that the fans are the most important and getting them together to watch a British classic. What finances can we gather to get Fury in the ring? It’s a tough one but I’d definitely go for the fans this time around, for sure.

So would you take less money to have the fight in the UK, rather than abroad?

Yeah, why not? I’m fighting Pulev for a massive pay cut. We have to keep the sport alive. Matchroom are taking pay cuts this year as we have to keep the sport alive. We’re all doing our part at the minute. It’s all experience. We’re doing it now so I wouldn’t mind doing it again. It’s not harming me, and it’s for a bigger cause as well. It’s a massive cause and a big fight, but the main objective is how do we get Fury in the ring.