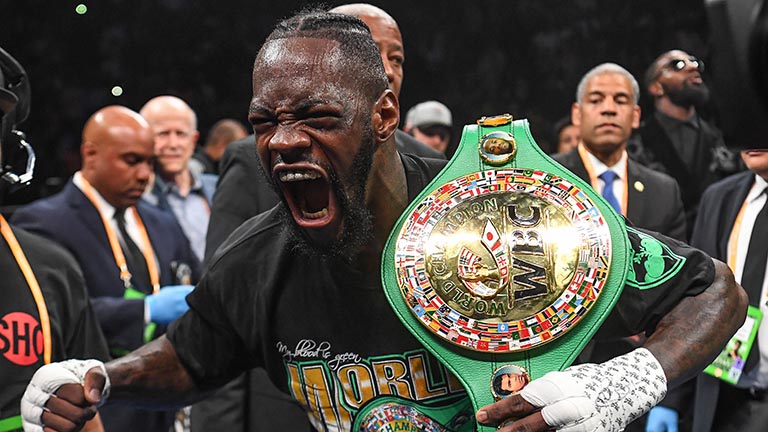 LAST night, at about the same time that Deontay Wilder announced plans to fight Tyson Fury again after fighting Luis Ortiz again, Showtime’s Stephen Espinoza implored the boxing media at the BWAA Awards to lose its cynicism, to be positive and to stop pointing out everything that’s wrong with the sport and instead focus on what’s right.

With that thinking in mind, Deontay Wilder announcing two fights this week – which just so happens to be the same week that Anthony Joshua makes his America bow against Andy Ruiz Jr – is a bold and daring move.

The plan is to take on Ortiz in September in a rematch of last March’s humdinger before taking part in a sequel to another thriller, December 2018’s 12-round draw with Fury. Two highly appealing and risky fights for Wilder, it’s true.

Ortiz is not so much a banana skin but a minefield and Wilder, far from bombproof, will need to tread very carefully indeed if he’s to come through unscathed. So carefully, in fact, that it seems foolhardy to be planning what might come after it.

Now those who ignore Espinoza’s advice and allow cynicism to cloud their view of the timing of Wilder’s announcements might decide that they were designed purely to overshadow Joshua-Ruiz and highlight, instead, that the WBC heavyweight champion is the important one in the division.

Indeed, anyone who compares Wilder taking on Ortiz and Fury with Joshua’s WBA, IBF and WBO defence against Ruiz tonight, and concludes that the Englishman’s current schedule is tougher than Wilder’s needs their head looking at. And while there is potential for Joshua-Ruiz to be exciting, the outcomes of both Wilder-Ortiz II and Wilder-Fury II are far from the certainty that “AJ’s” contest appears to be.

Furthermore, Top Rank and Premier Boxing Champions joining forces to promote the Fury return (once Wilder has beaten Ortiz at a venue, date and time still to be confirmed) is a positive step when it appeared for so long that the rival promoters would not come together and make the fights the public wanted to see. Let’s also not forget how much we all wanted Wilder-Fury II just a few short months ago – without question it is one of the best fights to be made in the heavyweight division.

Whether or not the two US promotional giants are coming together to try and freeze the UK’s Matchroom out of the heavyweight equation is another one for the cynics to decide.

No, the real problem about the latest set of announcements is they push back what is truly the biggest and best fight back even further, out of view and perhaps once and for all, out of reach. Which is a shame. Not because I don’t want to see either of 33-year-old Wilder’s proposed rematches, but because I believe it’s about time the heavyweight division staged not only one of the best fights it can, but the best fight it can. One that would make the whole world stop and look. One between two unbeaten and accomplished knockout artists that could end at any moment.

When was the last time the heavyweight division did that? Or, more to the point, had such a rich opportunity to do so? Think about it. I’d argue you would have to go back to David Haye taking on Wladimir Klitschko in 2011 to get anything like it and even then, with Vitali Klitschko still active, it wasn’t truly the case.

But for as long as Wilder has held the WBC title (since January 2015), the best fight to have been made could have been made, and that was against whoever held the other belts. Wladimir ended up losing them to Fury later that year before Fury lost his focus in the wake of a failed drug test and a little over three years ago, Joshua started to mop up the mess.

At any point since 2016, Joshua-Wilder would have been a super fight yet here we are, in 2019, with one half of that super fight announcing, in effect, that it definitely won’t be happening any time soon. And the longer it doesn’t happen the more likely it never will.

And that isn’t with cynicism I speak, it’s with genuine disappointment.