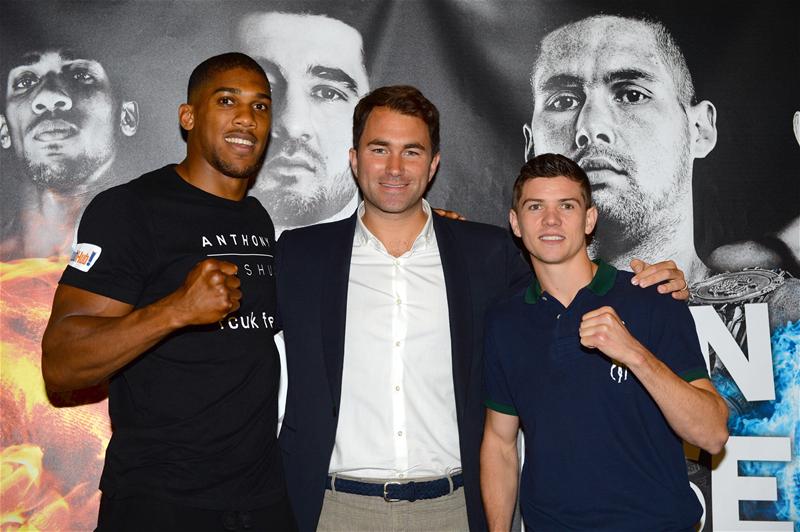 Luke Campbell: I’m in great shape… Just as a whole I feel that I’m progressing and I’m getting better each week. My body’s changing and adapting to going more rounds. I feel as though my progression is going really well and I’m enjoying what I do.

Anthony Joshua: It’s been tough, it’s been hot in there [Tony Sims’ gym]. Darren Barker, when he on his world title, to be around that kind of company in the gym, it’s just like when I was around Olympians. It’s always good to be around good company because we’ve got people that are dedicated and working hard and I learn stuff from them as well. I use it in my craft. It’s a really good opportunity to be in a gym like that.

LC: I’ve never been out the gym. I was always in the gym as an amateur. It’s the same as a professional. I’m always training even when they’re no fights coming up I’m training and working on things. Even when I was having a break from boxing after the Olympics I was still in and out the gym even there, so I’ve never really had much time away from boxing. Even when I was doing Dancing on Ice I got them to put a punching bag up and I used the bag a couple of times a week, I punched the bag and got my eye in and stuff like that. I’ve never really been away from it. I started training full-time after Dancing on Ice, back into boxing. So come fight night I was ready to go. The more fights you see, the better I’ll get.

AJ: Boxing’s near enough embedded in me now. Because I stay in the gym. I’m good, I’m fine. I enjoy boxing. I enjoy competing. This isn’t going to be the best of me just yet. [I’m going to get] stronger, being more dominant. I’m a big guy. Amateurs is all about movement, hitting your opponent, trying not to get hit. Now I’m going to add in a bit more head movement, parrying shots and counter-attacking. That’s what the pros is about.”

LC: When I had that silver medal in the [2011] World championships, I was devastated. You see some kids they’re stood there with a bronze medal or a silver medal and they’ll be absolutely over the moon. I wasn’t. I felt sick seeing that Cuban there with my gold medal. It was a very controversial win, two points in it. I definitely lost the first round by two points. But I bossed him in the second and bossed him in the third. But everything happens for a reason. It gave me that extra drive, that extra hunger to push forward and make it right for when the Olympic Games came. And that’s what it was all about. That was a learning curve to put me right for the Olympics and it did.

AJ: I spoke to [Richard] Towers about his experience in the [Wladimir] Klitschko camp and he just said they’re so professional in everything they do, down to the sparring. Everything he does, he tries to be dominant. It kind of shows why he is where he is at the minute… I’m far from it, far from where they are right now but just to get a look on something that you never forget, working with the champs.

LC: It’s just been learning curves all the way really. There was the Azerbaijan World championships, the amateur career, it’s been there and I’ve learned a lot from it and I’m going to take that forward and take it into the pro game and progress from there. [Joshua has] been the through the exact same as I have. He’s been through the Olympics. I learned off the Olympics and took it forward into my [first] fight. He’s had all the pressure and the nerves and everything going through the Olympic Games, so he’s had a great experience there in life of dealing with that to take forward and use it in the pro game. That’s what I did.

AJ: Because we’re doing 10 rounds of sparring, eight rounds of sparring now… You have to just be more alert I think. The headguard’s a bit of a comfort thing, padded gloves as well. So when I’m fighting there’s no headguard, a glove that’s basically hitting you with my fist. The gloves are small. [At GB gloves] were like pillows. Imagine no headguard and someone smashing your jaw with tiny gloves, it’s going to be tough.

LC: There’s a lot of pressure on the first fight. I’m happy to be on the undercard [for his second pro contest] to these guys and box my way to the top.That’s the plan, I want to fight regularly. That’s what it’s about. I’m always in the gym so having a fight coming up gives me something to prepare for… I do what I need to do. I’ve just got to concentrate on me and prepare what I’m doing, what my faults are and what I need to do right and then my team have looked at whatever they need to look at and trained me in the right way.

AJ: Coming out at the O2 [for his pro debut], I think the key code was relax and enjoy what you’re doing. All I had to do was take what I do every day in the gym into the ring, which I did, and that’s why I think I came out victorious in the first round.