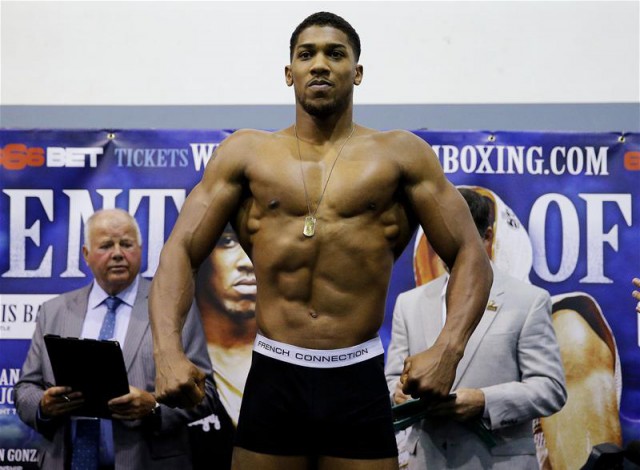 John Dennen sees Joshua, Selby and the undercard boxers weigh in ahead of Saturday's show at the O2

THE fighters boxing on the big bill at the O2 on Saturday (October 11) hit the scales today. Watford’s imposing heavyweight Anthony Joshua weighed in at 16st 12lbs 9oz, towering over his Russian opponent Denis Bakhtov, 16st 4lbs. They fight for a WBC International title in a scheduled 10-rounder.

Joshua, an Olympic gold medallist, began his professional career a year ago but he played the pressure down. Speaking at the preceding day’s press conference he said, “I feel confident. I feel relaxed. I’ll find my level sooner or later.

“I’m just the geezer that everyone’s hyped about now.”

“I’m here to win,” Bakhtov promised. “Really I’d like to know whether he is a champion or not.”

Lee Selby faces a defining bout when he boxes Australia’s Joel Brunker in a final IBF featherweight title elimination. The Welshman was 8st 13lbs 10oz, Brunker 8st 13lbs 6oz. “This is the acid test, against a quality fighter,” Selby reflected. “It should be fun.”

The Australian said, “I just want to give the English public a good fight and hope they enjoy it. Lee’s a great fighter. This is what boxing is all about.”

Tyler Goodjohn struggled to make 10st for his English light-welterweight title fight with Ricky Boylan, 9st 13lbs. But he has been grafting for this since his loss to Tyrone Nurse earlier in the year, saying, “I didn’t feel sorry for myself, I got straight back in the gym. I’ve trained twice as hard.”

Two other intriguing light-welterweight battles will take place on the O2 bill. John Wayne Hibbert, 9st 13lbs 6oz, could have his hands full with Argentina’s Leonardo Esteban Gonzalez, 10st, when they fight for the WBC International title. “Let’s see how he can match up to light-welter and see if he can take me on,” warned Hibbert.

John Ryder goes in with Theophilus Teteh for the vacant WBA Inter-Continental title. This fight should launch him back into a competitive middleweight mix. The veteran of a close points loss to Billy Joe Saunders, Ryder said, “I think there’s a lot more self-belief in me now.”