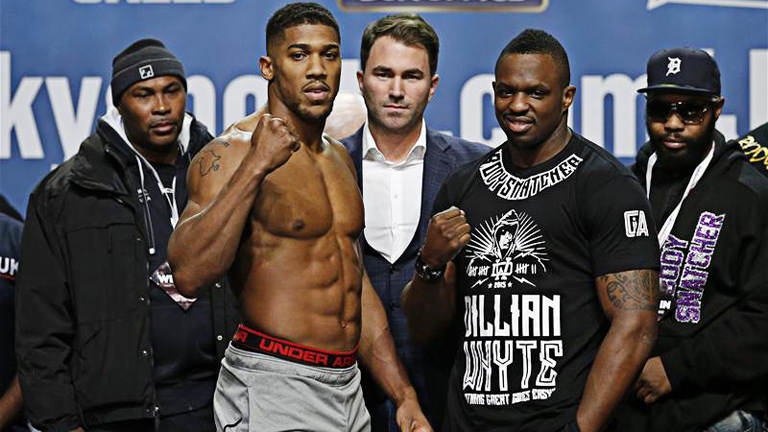 AHEAD of Saturday’s grudge match at the O2, Anthony Joshua and Dillian Whyte hit the scales. Olympic super-heavyweight gold medallist and Commonwealth champion Joshua weighed in at 17st 7lbs, with Whyte a touch heavier at 17st 9lbs. The two contest the vacant British heavyweight title on December 12.

For the obligatory face off Whyte turned his back to Joshua. Smiling, Anthony shrugged and walked round to glare down at Dillian.

A more eventful staredown saw Gary O’Sullivan open his mouth wide, lunge forward and plant a small kiss on a disgruntled Chris Eubank Jnr. The two then had to be pulled apart. Throughout the build up, until now, Eubank had refused to face the Irishman, just in case of this exact eventuality. O’Sullivan had weighed in at 11st 5 1/2lbs but Eubank came in a quarter pound over the 11st 6lbs limit so still has some weight to lose for their WBA ‘regular’ title eliminator. He later scaled 11st 5lbs 3/4lbs.