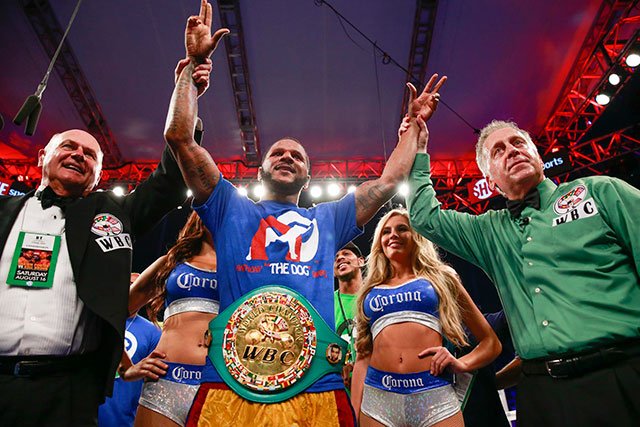 GEORGE GROVES takes on little known Christopher Rebrasse on September 20 at Wembley in a WBC super-middleweight title. Victory will put him in position to challenge new champion Anthony Dirrell but the American – who beat Sakio Bika for the title last month – does not believe that Groves deserves another chance at world glory.

Dirrell, in Las Vegas to watch the impending Floyd Mayweather-Marcos Maidana rematch has bittersweet memories of his coronation. In December he was held to a controversial draw by Bika, before setting the record straight in their August return. The African granite ball is notoriously horrible to fight and Dirrell, though overjoyed with the outcome, did not enjoy what came before.

“I couldn’t dwell on it [not getting decision first time] so I got another opportunity and I won,” he explained. “The first fight is ancient history, I’m a champion now. I won more convincingly this time because I laid on the ropes and I wouldn’t let him inside. It was a challenge, so hard, though. No one wants to fight Bika twice – one time is enough. But it was a good experience for me and I don’t think I’ll have anybody as tough as him that I ever fight again.”

Julio Cesar Chavez Jnr is Dirrell’s current mandatory, but the Mexican has opted not to pursue that contest. So the American – brother of Andre Dirrell – is on the lookout for a challenger when his injured hands have healed.

“There’s so many good fighters out there and I want the best fight that’s for me,” he said. “It’s really about money right now because I’m the champion and they want what I have. It’s really about the money and it has to make sense.”

Dirrell likes the idea of unifying the titles, and would welcome a showdown with Groves’ conqueror, IBF champion Froch.

“Of course. If Froch want to do it we can do it. Like I say, it’s about the money right now. If he wants my title he’ll have to come and get it because, no disrespect, I’m not going to the UK, from experience,” Dirrell said.

That experience came from watching Andre lose a controversial decision to Froch in Nottingham in 2009.

“I was there and I thought he [Andre] won the fight,” Dirrell recalled. “Froch came on in the later rounds but I thought my brother won. But that’s ancient history too. You can’t change the past, you can only move forward.”