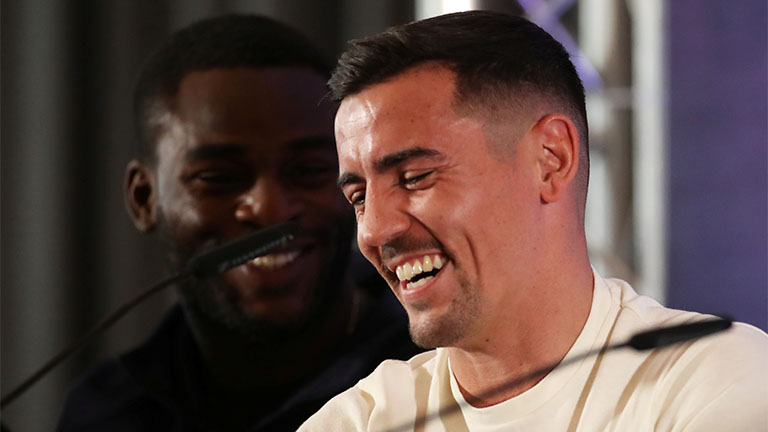 ONE of Manchester’s favourite boxing sons, Anthony Crolla, returns to the scene of his biggest triumph for a farewell fight on November 2. Crolla, who will turn 33 a fortnight later, boxes on a bill at the Manchester Arena promoted by Matchroom, and televised by Sky Sports in the UK and DAZN in the USA. No opponent has yet been named, but it will be the final professional fight for Crolla, who in April was beaten in a challenge for WBA and IBF lightweight titles by Vasyl Lomachenko.

The Mancunian has fond memories of the venue, where in July 2015 he had a controversial draw with Darleys Perez for the vacant WBA 135lbs belt, only to put things straight with a seventh-round Knockout of the Colombian in the same building four months later.

In May 2016, in another outing at the Manchester Arena, he retained with a spectacular knockout of Ismael Barroso. Crolla, 34-7-3 (13), has also notched wins there over Steve Foster Jnr, John Murray and Ricky Burns, while twice dropping a decision to Jorge Linares in world title bouts.

Official top of the bill on November 2 will be the bid by Irish heroine Katie Taylor to become world champion at a second weight. Taylor, who has unified the IBF, WBO, WBA and WBC lightweight belts, will challenge Greece’s Christina Linardatou for the WBO title up at super-lightweight.

Linardatou, born in the Dominican Republic, is 12-1 (6) with her only loss coming to Delfine Persoon for the WBC lightweight title in 2016. Taylor completed her unification quest in June when she took that title from the tough Belgian in an extremely close and hard-fought battle in Madison Square Garden.

“It’s a new challenge at a new weight and something I’m really excited about,” said Taylor. “I still feel I have so much left to achieve in the sport and becoming a two-weight world champion is one of those goals.

“There are still so many huge fights out there for me like the Amanda Serrano fight, a rematch with Persoon and a fight with Cecilia Braekhus. But the first goal is November 2 and winning another world title.

“I don’t have any issues making lightweight so I think I can move comfortably between the two weights.

“I always want to push myself and Christina’s an excellent world champion, so it will be a big test for me.”

Linardatou insists she is not coming to make up the numbers. She said: “I plan on leaving England with my title. If I need to knock Katie Taylor out in order to retain, that’s what I’ll do.”

The Greek has already won in England, outpointing Sam Smith in Leeds in November 2015. She won the WBO 140lbs crown with a sixth-round stoppage of Kandi Wyatt in March before retaining on points against Deanha Hobbs in June.

Taylor has boxed twice at the Manchester Arena, in early career undercard fights in 2016 and 2017. She said: “To come back in November and headline a card there a couple of years on is amazing. It’s played host to some huge nights in boxing history, so I’m honoured to be part of that tradition.”
The show includes other good fights too, including a 12-rounder between rising light-heavyweight Joshua Buatsi against former world title challenger Blake Caparello, the Aussie southpaw who challenged Sergey Kovalev for the WBO title in 2014.

Buatsi, a bronze medallist at the 2016 Rio Olympics, has won and already relinquished the British 175lbs title as he moves towards world title contention. He has won all 12 pro fights, 10 inside the distance – including the last seven in a row.

Another 12-rounder sees Felix Cash defend his Commonwealth middleweight title against English champion Jack Cullen of Little Lever near Bolton. This fight was mean to happen in July but an injury to Cash forced a delay.

Former highly decorated amateurs Gamal Yafai and Qais Ashfaq continue their progress with contests on the undercard. “I’m so happy to be back in Manchester for this huge show,” said Matchroom Boxing chief Eddie Hearn in a statement that landed as we went to press.

“Katie Taylor is now established as one of the biggest stars in world boxing and she bids to make more history by becoming a multi-weight world champion by challenge WBO super-lightweight champ Christina Linardatou.

“Hometown hero Crolla rolls the dice one more time as he takes part in his final fight in the sport in the arena that has hosted so many epic Anthony Crolla nights.”