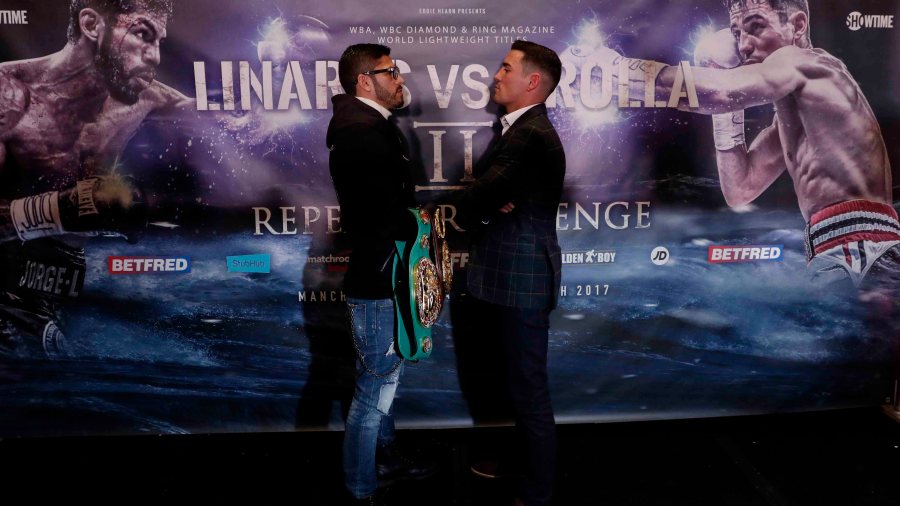 ANTHONY CROLLA and Jorge Linares faced off today at a press conference ahead of their March 25 rematch. Linares defeated the then WBA lightweight champion last year and Crolla is determined to settle the score.

“March 25 I’m going to be better than I’ve ever been. That’s what I know I’ve got to be,” he continued. “I am better in rematches. Last time I just came up short, lost to the better man on the night. March 25, I believe the result will be different.”

His trainer Joe Gallagher questioned whether Linares would be able to perform at the same level as he had in the first fight. “It’s a great fight. Didn’t go Anthony’s way last time. Jorge, in my opinion, was the best Jorge Linares there’s been. It was one of the stand out performances in his career,” Gallagher said. “Can Jorge Linares do that again?”

Linares, the reigning champion, is adamant he will be even better. “I wasn’t supposed to win the first one. Thank God I did,” Linares said. “These belts mean so much to me. They mean so much to my career and they mean so much for my country. We’re going to work very hard to do it again. To repeat and get the win.

“We’re going to face a better Anthony Crolla… We know he’s coming hungry. We know he wants those belts. But that just motivates me to work harder, trainer harder because you’ll also see a better Jorge Linares. We’re going to do a new strategy and come up with a new gameplan.”