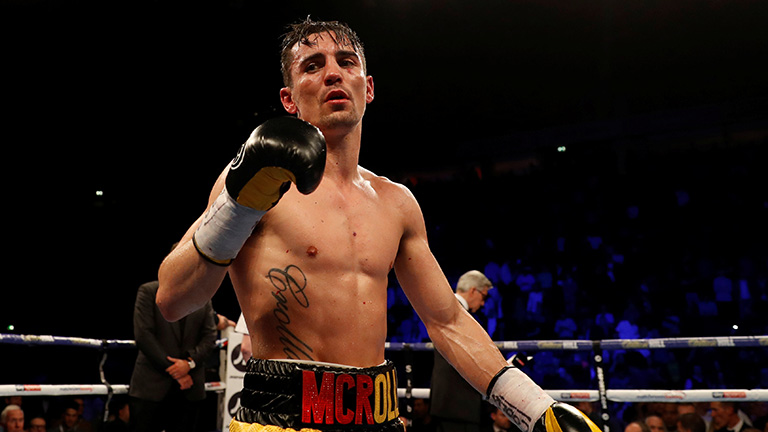 AFTER picking up a good win over Ricky Burns in Manchester in October, Anthony Crolla will box next in spring 2018 as he plots his route back to a world championship at lightweight.

“If Matchroom did a show in New York in March, I think Anthony would like to box on that, on the undercard while a title opportunity became available,” his trainer Joe Gallagher told Boxing News.

He suggests a rematch with Ricky Burns is not hugely appealing. But Crolla told Gallagher: “If they’re going to throw a load of money at me to do it, you can’t turn that down.”

Joe said, “If Ricky had beaten Crolla, they wouldn’t be looking behind him, they’d be looking forward. Anthony, he beat the former WBA super-lightweight champion of the world, which is a great win, a three-time world champion. Anthony is deserving of another world title shot and I’m sure that Eddie [Hearn, his promoter] will be working hard to deliver it for him.”

World titles could become vacant, if champions like Mikey Garcia or Jorge Linares move up in weight. Ray Beltran is expected to fight for the vacant WBO crown in February. “We’ve got the option of Ray Beltran, when he wins the world title, most probably challenge him for the world title,” Gallagher said. “If Garcia wins and moves up and Linares beats [Luke] Campbell and moves up, then the belts become vacant. Anthony had a great win last time over Ricky Burns to push himself back up those rankings, to put himself in a position for a shot at any of the vacant belts, especially the WBA one where he was a world champion in before.”

“I do think that’s a big fight. I think the calibre of the two of them, they’d have to do it for a world title at least.”