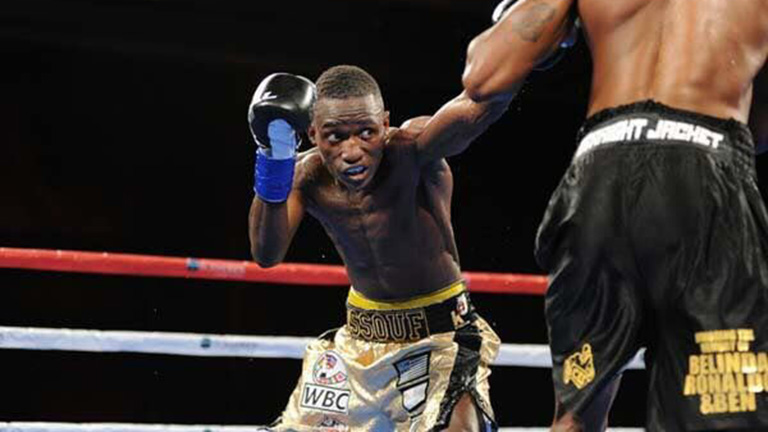 In the absence of justice, what is sovereignty but organised robbery? – St. Augustine

Strange scorecards. Questionable stoppages. These occurrences in boxing typically evoke outrage for a few days. The aggrieved party ultimately finds solace in their paycheck while the masses move on to the next headline.

But what about the stories that don’t trend on Twitter? The club shows with fighters struggling to keep the lights on and provide a warm meal for their families? On August 26, while everyone watched the billion-dollar Mayweather-McGregor show, another heist took place at Foxwoods Resort and Casino in Mashantucket, Connecticut.

Welterweights Jimmy Williams and Issouf Kinda headlined a CES Boxing-promoted card. Williams, (15-0-1, 6 KO’s), is from Connecticut and is part of the CES stable. Kinda, (18-5, 7 KO’s), once an accomplished amateur in his native Burkina Faso, relocated to the US in 2007 and settled in the Bronx.

Kinda, 29, works full-time at a soul food restaurant. Boxing has become a side gig. Despite a decent record that includes a 2012 upset of Mike Arnoutis, his career has had its share of lows.

Naturally, Williams was the house fighter against a Kinda coming off a TKO loss and a nine-month layoff.

It wasn’t so one-sided once the bell rang.

Williams was busier in the first, legally and illegally. With 30 seconds remaining, he landed two rights to the back of Kinda’s head during a clinch. Kinda pointed it out to referee Steve Smoger. But the ref, known for allowing fighters to fight, ignored him.

After a close second, Kinda found his range in the third, winning the stanza with a series of rights.

“It looked like it was shaping up to be a good fight,” said Jimmy Birchfield, president & CEO of CES Boxing.

Kinda picked up where he left off in the fourth but about 30 seconds in, Williams rabbit-punched him again during the clinch. Again, Kinda motioned to Smoger, who both disregarded the complaint and didn’t issue a warning.

Moments later, they fell into a clinch again. As Smoger stepped in to separate them, Williams fired two more rabbit punches. Kinda responded with a jab. Smoger grabbed both fighters to break their clinch. While he did so, Williams threw another rabbit punch. Kinda attempted to retaliate with a hook, but Williams countered it with a right cross.

Kinda’s hook missed Williams but grazed Smoger. Williams’ right sent Kinda crashing to the canvas. All of this occurred as Smoger—who, in this writer’s opinion, was not in command of the situation—struggled to separate the two. Instead of admonishing both fighters, and calling an official halt to the action, as I would presume, Smoger, inexplicably, began counting Kinda out.

By the time Smoger reached the count of four, ringside doctor Anthony Alessi had hopped into the ring. Kinda began to rise but Dr. Alessi held him down as Smoger waved the bout off.

According to Kinda, who was halfway up when the fight was stopped, he was told to remain on the canvas. His cornermen were livid, leaping into the ring and waving frantically at Smoger.

Asked what his thoughts were on Smoger’s decision, Birchfield says, “Steve is a Hall of Fame referee. They didn’t obey his words in the moment of them breaking up. Now were they fully broken up? It didn’t appear that way. I don’t know what could have been done. Who do you disqualify? Because they both threw punches together.”

When the referee breaks a fighter from a clinch, they must take a full step back. Hitting on the break is illegal. The referee is within reason to disqualify the fighter who committed the foul. Or, if both fighters were hitting on the break, to rule a no contest.

But that’s only if a fighter is unable to continue after the foul has been committed.

“No way was he rising,” says Dr. Alessi, a neurologist. “I thought he had a brief loss of consciousness. By the time I get up on the apron, Smoger is up to an eight-count and this guy doesn’t seem to be showing any sign of getting up. Basically, I had a disabled fighter in the ring. I also had a ref who may have been impaired because he got hit too.”

The doctor’s recollection doesn’t match the video. To reiterate, Kinda began rising at four, but nor should a count have commenced given the dual fouls.

“The referee was telling us to break” Kinda says. “When I went down, I told him, ‘that’s not fair.’ The doctor said, ‘Don’t worry, we all saw that you were fouled. You’re going to get the win.’”

Further, according to Kinda and trainer Kwame Asante, Smoger never came to the dressing room to go over pre-fight instructions or expectations.

Asked if it was normal for a ringside doctor to climb into the ring mid-count to stop a fight, Dr. Alessi believes it was warranted in this instance. He also said he’s done that before, although he couldn’t remember the last time it occurred.

Kinda was taken to the hospital following the bout, as is protocol for all fighters when KO’ed. Dr. Alessi wouldn’t disclose further information on Kinda’s state, citing doctor-patient confidentiality.

Team Kinda filed a protest with the Mashantucket Pequot Tribal Gaming Commission three weeks ago. At the time of this writing, they still have not heard back.