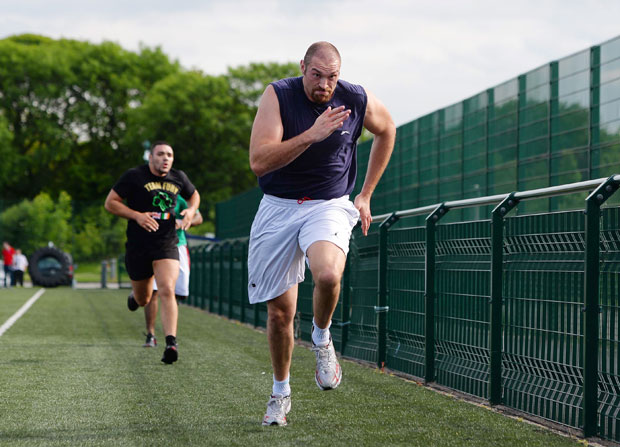 Frank Warren discusses what next for Tyson Fury

TYSON FURY’S tortuous return to boxing has undergone another twist. His hearing with UK Anti-Doping has been halted, thought to be due to a potential conflict of interest on the UKAD panel. It means this obstacle to Fury being able to return to boxing and get a licence once again still remains. It’s unclear how the hearing will proceed.

If it continues to drag on, Frank Warren said, “Then it won’t be heard till October.”

“It’s a liberty,” the promoter continued. “There’s going to be a scream about that, that can’t be right. The man’s got a living to get and this thing [the drug test in question] took place in 2015. It’s disgraceful. You’ve either got a case or you haven’t got a case. I’ve had a test, I’m positive or I’m negative. If I’m positive and I’m just over – this is the reason why. Why does it drag on, from 2015?”

If the allegations against Fury are dismissed then Warren will have a place for him on his July 8 bill in London. “I spoke to him [Monday] morning and he’s training hard. I think they [UKAD] have got a problem. He’s 28 years of age, boxing’s a young man’s game, he’s entitled to make a living. If he’s done wrong then get it over with. It’s wrong. How can this be right?” the promoter said. “I think somebody’s got to intervene, even if it’s the Minister of Sport or something. This on any level can’t be right.”

Warren voiced their grievances with the situation. He continued, “Very frustrating. I feel for him. At least we’re running shows every week. This is what he does and having it hanging over your head, if it is then [October], then it’s been two and a half years and that’s outrageous. He weren’t banned for the Klitschko fight or for any of their title fights. This is bulls***. And all that crap about contaminated meat. That is a load of rubbish. That was a leak from UKAD. They’re all very well leaking stuff out all the time, and it’s wrong.

“They never banned Hughie [Fury], he’s had five fights since. It’s just stupid. I’ve never heard of it. You think of any other sport, you get found guilty, the first thing you do, you can’t participate in sport.

“They’ve allowed him to participate in sport. So that tells you these levels are not up there. It should all be based on facts and what I can’t get in my head is they’ve brought this case, why has it dragged on for two years.”