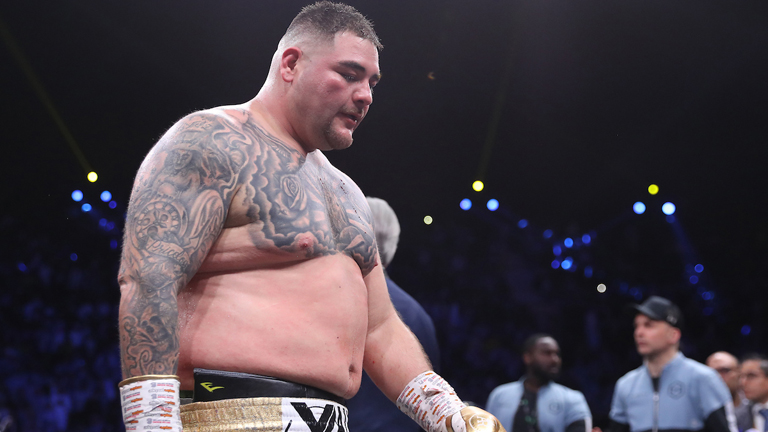 WHEN Anthony Joshua neatly reclaimed his world heavyweight titles in Saudi Arabia on December 7 he ended the abbreviated tenure of Andy Ruiz Jr.

Ruiz, the first heavyweight champion of Mexican descent, devastated Joshua in New York in June but his place at the top of the table lasted just six months to when – 15 lbs heavier than in their first fight – he plodded around the ring eating Joshua jabs for 12 rounds.

Martin had found himself matched with Vyacheslav Glazkov for the IBF heavyweight belt vacated by Tyson Fury in 2015. And was tamely crowned when Glazkov twisted his knee in the third round of their clash in January, 2016.

Martin put his title on the line for the first time against Joshua just four months later for a reported £6 million [$8.5m] and his 85-day rule as champion (the second-shortest in heavyweight boxing history) was predictably over in two painful rounds.

Going right back to 1905 and Marvin Hart knocked out former world light-heavyweight champion Jack Root in twelve rounds on July 3 to win the championship vacated by James J Jeffries.

Hart’s reign was also a brief one as he lost the title in February 1906 to Tommy Burns.

In the dark years between the reigns of Jack Dempsey and Joe Louis the title changed hands like a hot potato no less than five times, with Jack Sharkey, Primo Carnera and Max Baer all managing to hang on to the belt for just a year apiece.

In more recent times Sergio Mora’s rule as WBC light-middleweight champion lasted just three months between edging out the late Vernon Forrest in June 2008 before losing it back to him that September.

Here are some more notable short, but sweet championship reigns.

ITALIAN-AMERICAN Canzoneri had won the 10st belt for the second time when outscoring Battling Shaw over 10 in New Orleans. But the Hall of Famer’s reign would be over in just 33 days as Barney Ross defeated him on a majority, again in a 10-rounder, in Chicago.

TUCKER stopped Buster Douglas in 10 for the vacant IBF belt and then took on WBC/WBA champ Mike Tyson as part of HBO’s unification series to decide the undisputed champ.

Although Tucker frustrated Tyson for periods with his speed, Tony lost on points over 12, making him a champion for only 63 days and the shortest-reigning world heavyweight king.

BRITAIN’S Turpin was stunning taking the title from Sugar Ray Robinson in London, winning a 15-round points decision, but 64 days later in New York it was a different story.

Although Turpin again gave the American maestro fits and inflicted a nasty cut, Robinson caught up with him in the 10th.

THE Little Rock, Arkansas man won the vacant NBA version by outpointing Charley Fusari and, unlike all the other fighters on this list, didn’t lose his next fight. He squeezed in a non-title win against Don Williams before losing his belt by decision over 15 to tough Cuban Kid Gavilan, making his reign 65 days long.

UNDERDOG DeMarco, coming off a poor performance (draw with Jimmy Carter), upstaged relatively new champ Johnny Saxton, who was looking for an easy defence rather than box the top contender, Carmen Basilio.

DeMarco won a real battle in the 14th and then elected to face Basilio 70 days later, losing in the 12th. But Tony felt no embarrassment. He said he would have been happy to be champion even for just a day.

THEY make them tough in Mexico. Southpaw Limon had won the vacant WBC crown by knocking out Ildefonso Bethelmy in the 15th in Los Angeles, but had to defend against Britain’s Cornelius Boza-Edwards only 86 days later. Unfortunately for Limon, he lost a bruising encounter on points over 15 rounds.

JAPAN’S Mihara had won the vacant WBA belt by outpointing Rocky Fratto in upstate New York over 15 rounds. But his first defence, against New Yorker Davey Moore in Tokyo 87 days later, was a calculated risk.

Moore, an outstanding amateur, was having only his ninth fight, but proved too good, stopping the champ in six.

FAMOUSLY, Duran had moved from lightweight, where he was a longtime champion, to challenge the outstanding and undefeated Sugar Ray Leonard, making the second defence of his WBC belt. Duran won a sizzler on points.

But Leonard got him back in the ring 155 days later and outboxed and embarrassed him, leading to the unforgettable No Mas night, when Duran turned his back in the eighth and surrendered.

THE gap-toothed Olympic light-heavyweight king caused a sensation defeating Muhammad Ali for the heavyweight crown in only his eighth fight, but Ali beat him on points in an immediate return, for the WBA belt, seven months later (212 days).

ONE mighty right to the jaw relieved an unprepared Lennox Lewis of the title in five rounds in South Africa.

Rahman tried to instantly cash in, accepting a defence in China, but Lewis forced him into a rematch 224 days later in Las Vegas and regained his belt, flattening Hasim in four.