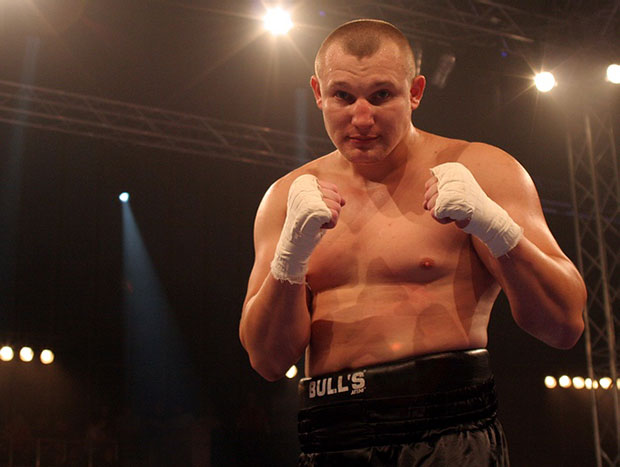 James Slater talks to Rudenko ahead of his toughest test

UNBEATEN 30-year-old Ukrainian heavyweight Andriy Rudenko faces the likewise undefeated Lucas Browne in Wolverhampton on August 1st. At stake will be the WBA Inter-Continental heavyweight strap, but of far more importance, a world ranking will be Rudenko’s should he win.

And the 24-0(16) fighter is sure he will take Browne’s perfect record away next month.

Q: How much have you seen of Lucas Browne, which of his fights have you watched?

Andriy Rudenko: “We have watched many of Browne’s fights, which you can find on YouTube. There were 12-rounders against James Toney and Clarence Tillman and I’ve also see a couple of his last KO performances, where Lucas knocked out Travis Walker and Richard Towers. Browne is a tough and power-punching fighter who has OK conditioning for a man of his age and size. But when I watched his fights I haven’t seen anything unusual. So I cannot say that he is something special. He is an ordinary slugger, so I expect a tough but predictable fight.”

A.R: “No, absolutely not. On the contrary, it’s much more comfortable for me to fight against big guys instead of trying to run after small heavyweights who are faster and slicker then their massive colleagues. Browne is so big that it would be difficult for me to miss (laughs).”

Q: What was you amateur record and did you win any titles?

A.R: “My amateur career included approximately 150 fights and I won about 115 to 120 of them. I became junior and youth champion of Ukraine. At seniors I was a two-time silver medalist of Ukraine at the national championships. My biggest win as an amateur took place in the semifinal of the Ukrainian national championship in 2006, when I knocked out  Roman Kapitonenko in the first round; he was the future silver medalist in the World Championships in Milan in 2009 and he also became a two-time European bronze medalist, in 2008 and 2010. Also I won a couple of international boxing tournaments. My biggest amateur achievements are [winning] bronze medals at the  World Military Boxing Championship and the World University Boxing Championship.”

Q: You are a big puncher, are you planning to hurt Browne early to get his respect?

A.R: “No, I have no plan to take hasty and unnecessary risks, or of being caught by one of his hard counterpunches at the beginning of the fight. So I’m going to take a good look at him before rushing on him with a flurry of punches. Of course, if I hurt Browne I’ll try to finish him immediately.”

Q: Who has given you the toughest fight so far?

A.R: “ A couple of my opponents, who were 15-20 kg lighter [than me] brought me some trouble because they were very elusive and it was not too easy to catch them with a big punch. Maybe the clash I had with Kenyan journeymen Raymong Ochieng was my most spectacular fight, because it was a total rumble. But I was much stronger and skilled then Ochieng so that rumble wasn’t hard for me at all. I cannot say that I’ve already had really tough fights in my pro career. I think this upcoming bout will be the toughest one because Lucas is definitely much stronger than anybody who I’ve fought.”

Q: The heavyweight division is really getting interesting again. Do you see yourself fighting for a version of the world title soon?

A.R: “Of course, I want to fight for a world title. It’s my biggest dream and main goal in sports. I hope that my title shot is waiting for me ahead.”

Q: What is your opinion on: Bermane Stiverne, Deontay Wilder, and Tyson Fury?

A.R: “All of them are definitely top heavyweights right now but they are all different [style-wise]f. Each of them have their own advantages and disadvantages. Stiverne is very experienced and a hard-punching fighter with great counterpunching skills. Wilder is really big and has tremendous punching power. Fury is even bigger than Wilder and  very mobile for a guy of his size and he can punch too. Stiverne has of course already won the WBC world championship but he is not all that young. Wilder and especially Fury are young heavyweights who have great chances to win a world championship after Wladimir Klitschko has hung his gloves up.”

Q: Do you feel you will KO Browne?

A.R: “I’ve never fought out of Ukraine as a pro, so it would be great to make my first international statement by spectacular KO. Of course, I want to knock him out. But in boxing you can never be 100 per cent sure that KO will come. So there is a probability that our fight will last 12 rounds. And I hope that the judges in UK will do their job fairly. Though I will try to do my best to keep their scorecards out of it.”

Q: What can a win lead you to in your next fight or fights?

A.R: “Of course, I expect to get big fights. There were options in the contract, so if I beat Browne the British promoter will organize my next two fights. It would be great for me to fight against Stiverne, Fury, Chisora, Wilder or any other top heavyweight soon. A win over Browne would be great preparation for me before I fight against the bigger names.”