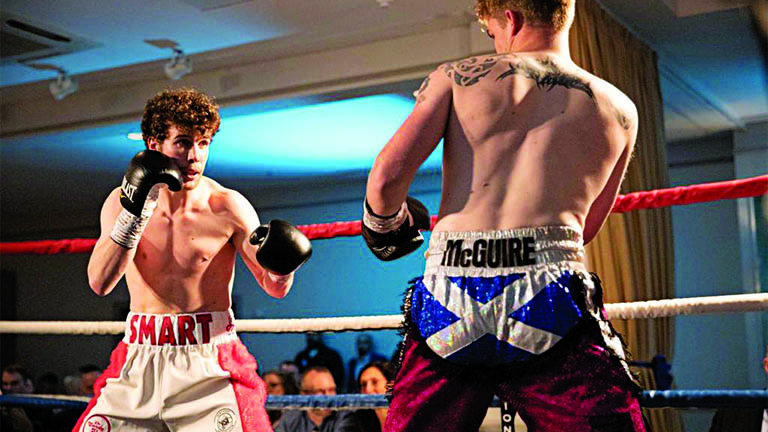 Andrew Smart is too clever for Dean Jones. Jon Bruce reports from ringside

THIS city witnessed its first professional boxing show for over 80 years as the Northern Sporting Club held its season-opener in the Town Hall. Home favourite Andrew Smart went up against Telford’s Dean Jones in a super-lightweight six-rounder, winning on points.

Smart was looking to put on a show for his raucous support and his punch output was impressive in the opening rounds. Jones was always game and beckoned his opponent on throughout. The local duly obliged, which resulted in a ding-dong battle full of guts.

However, Smart was always in control and recorded a deserved victory 58-56, to the delight of his fans.

Callum Stuart from Macduff had a frustrating night as his Brierley Hill opponent MJ Hall never really came to fight in this four-round super-welterweight bout. The West Midlands southpaw held and spoiled throughout, and it was more a relief when the fight ended in a whitewash 40-36 for Stuart.

Dingwall’s Ben Bartlett had an impressive start to his pro career against a determined Alec Bazza from Belfast over four rounds in a lightweight clash. Wily Bazza tried to take advantage of first-night nerves, but Bartlett stayed cool under pressure as well as displaying some classy movement and ran out a deserving 39-37 winner.

The opener saw Jobstown, Ireland man Dylan McDonagh win a four-round super-bantamweight contest against Marius Vysniauskas from Lithuania by a score of 39-37.

All the night’s contests were overseen by referee Kenny Pringle.

The Verdict An excellent night for the home prospects.