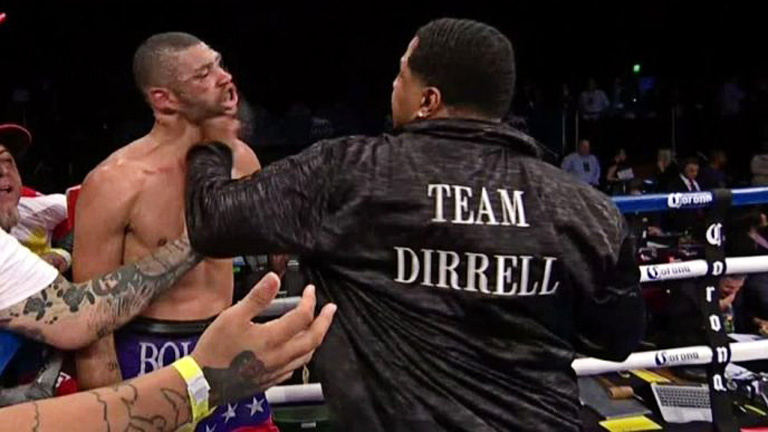 LEON LAWSON JNR – uncle of super-middleweight Andre Dirrell – has been suspended indefintely by the WBC after assaulting boxer Jose Uzcategui at the weekend.

Uzcategui was disqualified against Dirrell for hitting after the bell, after which Lawson approached him in a corner of the ring and attacked him.

Footage of the assault has gone viral online and local police are reportedly now seeking Lawson over the incident.

“The WBC is suspending indefinitely Mr. Leon Lawson from participating in any WBC sanctioned fight in any form or manner,” a WBC statement read.

“The actions, which have been seen all over the world, in which Mr. Lawson attacks and punches with bare fists fighter Jose Uzcategui have created regrettable damages to our sport.

“The WBC rejects any form of foul play, aggression and behavior. We will seek a meeting with Mr. Lawson to offer several forms of help to address this grave situation.”

Andre Dirrell’s uncle just swung on Jose Uzcategui after he was DQ’d for a late hit after the bell pic.twitter.com/YdWqSaqmWd

The fight was for an IBF eliminator, meaning that Dirrell is now mandatory challenger to world champion James DeGale, who originally outpointed Dirrell in 2015 to win his IBF world title.

“I’m sorry for what my coach has done,” Dirrell said after the Uzcategui incident. “My coach is my family, my uncle, and he was worried. He cares for me. He loves me. Please forgive him.”

Andre’s brother, Anthony, is set to fight Britain’s Callum Smith for the vacant WBC super-middleweight title in September, meaning Lawson cannot be a part of his team for that bout.

It is also being reported that Uzcategui’s team are appealing to the IBF to order a rematch with Dirrell, claiming that the disqualification was too harsh.