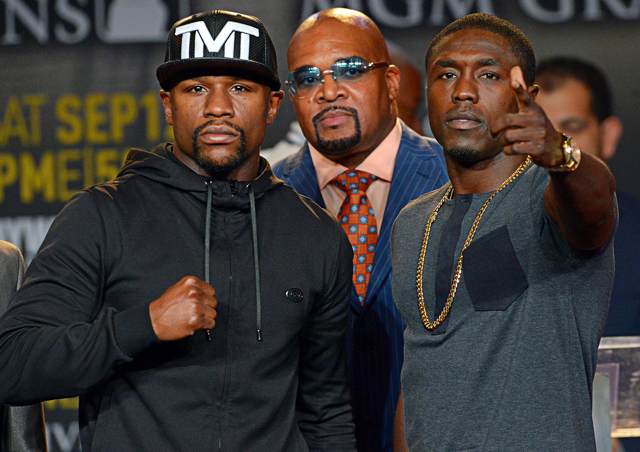 Berto feels he has the style to upset Mayweather

FORMER welterweight titlist Andre Berto is eyeing a mammoth upset as he prepares to face Floyd Mayweather at the MGM Grand in Las Vegas next weekend [September 12].

Having lost three of his last six, not many are giving the Florida native a chance at unseating the current pound-for-pound king.

Mayweather himself is gunning for Rocky Mariano’s 49-0 record, which he would match should he beat Berto, but Andre plans to throw a spanner in the works.

“It’ll be something huge [if I win]. Not just for me but for the sport. Floyd, he has been an icon for some time now and now you know he’s on his way to try to actually match a record,” he said.

“So for me being the young hungry fighter coming in, taking that away from him would be huge and that’s the mindset.”

With two of Berto’s losses coming to Victor Ortiz and Robert Guerrero, both of whom Mayweather has beaten with relative ease, many observers have slammed the fight for not being competitive enough on paper, especially after Mayweather’s historic win over Manny Pacquiao in May.

“The critics talking that way, they’re not in the gym training with us. They do something completely different than what we do,” he noted.

“We’re fighters and we’re able to do things that these critics can’t do, so I don’t get affected by the critics.”

When discussing how the fight will go, Berto maintained that he brings something different to the table, a fighting style Mayweather is yet to conquer.

“Maidana, his style works for him, he’s very reckless and, not too much speed, a lot of power and he comes from every angle. That’s not me.

“Castillo, same thing, you get a classic Mexican fighter that walks to you and gives you lefts and swings and that’s not me as a fighter. I’m saying I’m fast, I got power, and then I can move my feet, I can do a lot more as well.

“I believe I can apply pressure and box and both will be effective for me.

“I think my combination of speed and power that I bring to the table and at same time I believe I have the athletic ability to keep up with Floyd as well.”