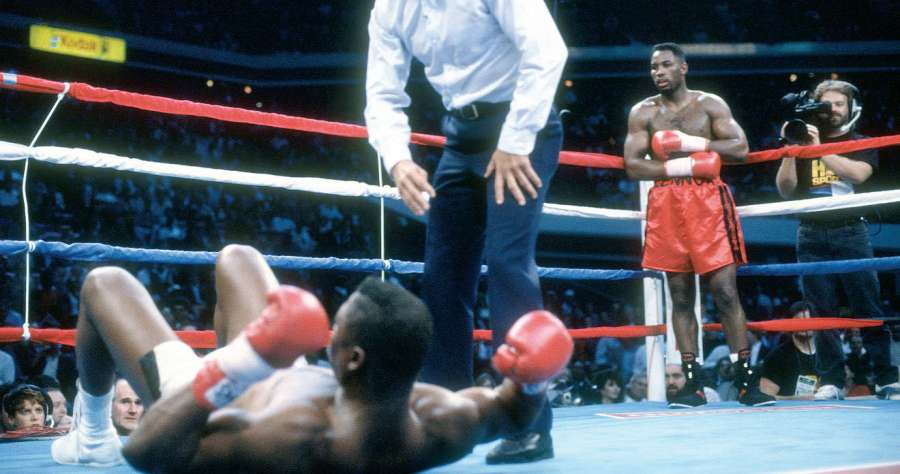 Tyrell Biggs is a cautionary tale that while Olympic gold might still be the most precious metal in the boxing game, the medal is not a shield, writes Steve Bunce

AT ringside in Manchester a couple of British Olympians had a close and personal look at the brutal and unforgiving business they have picked.
Joshua Buatsi was part of the DAZN team and Big Frazer Clarke wandered over and did a turn on BBC Five Live. The fight between Derek Chisora and Joseph Parker was minutes away when Clarke talked openly of knowing just how hard his path would be.

Clarke also knows that he walks a dangerous path, following in the footsteps of some great heavyweight fighters with Olympic medals and wild dreams; he knows that a medal of any shade from the Games can fast become junk.

The Olympic gold is still the most precious metal in the boxing game; silver and bronze remain hard currency. The danger is the fall to earth that follows any failure; it’s a medal, not a shield.

The history of the heavyweight division at the Olympics, which has been called super-heavyweights since Los Angeles in 1984, is a cautionary tale.
The new division started with heartache and crushed dreams. At those Games, a troubled American fighter called Tyrell Biggs won gold for the host nation; he was the last American to win at the weight. The gold was a curse for poor Biggs, a burden so heavy it consumed him.

Biggs was doomed from the start of his career and had little support or understanding from the people surrounding him; the crack pipe was just part of his terror. He turned professional in the mighty shadows of great Team USA fighters and was stuck there as his brothers from the LA Olympics became fighting legends. Biggs looked scared and broken whenever I saw him fight in the flesh, a man with demons too deep to hide. I often wonder in his dark decline if he could still hear the endless promises from the whisperers, the men selling him a fantasy in the days after he won the gold. Clarke, incidentally, is funny when talking about all the promises he has been made.

It needs to be said that a lot of fairy tales from those glorious 1984 Games ended in carnage. It would be hard to invent a darker series of stories; Biggs fell the hardest and the quickest and he had competition in decline from Pernell Whitaker, Meldrick Taylor and Henry Tillman. A gold-medal gang with convictions, drug addiction, prison time, assault charges and an early death.

Long before Biggs, there was another sad tale for an American heavyweight champion. In 1952, in Helsinki, Ed Sanders, a sailor, won the gold at heavyweight. He finally turned professional after a delay, but died after his ninth fight in 1954. He collapsed one night after his second loss, a brutal 11th round stoppage at the Boston Garden. He died from his injuries the following day. Sanders was just 24, 6ft 4ins and 15st 6lbs. There is a bit more to the story, not a lot, but a bit.

Big Ed was a quality fighter, fast, mobile and smart according to the few surviving testimonies. He had been drafted into the navy to serve in Korea. He made the boxing team and in 1952 he made the Olympic team. He was unable to turn professional after the Olympics because of his amateur status as a member of the navy. In 1953, he fought in the Golden Gloves in Chicago and lost on points to a young Sonny Liston. Well, I say young, but nobody knows if he was 21 or 25. There is no film of their fight and eyewitness accounts are rare; it seems it was tight.

It is hard to understand the low-key path taken by Sanders and the difficulties he faced to just get recognised. The gold medal must have been burning a hole in his pocket.

Anyway, back in Helsinki at the Olympics, Sanders knocked out three men to reach the heavyweight final. The man he beat in the final, Ingemar Johansson, won the world heavyweight title in 1959; it was remarkable redemption for the big Swede, who had been called a ‘coward’ and a ‘rat’ in the papers after losing to Sanders on a disqualification. He was thrown out for ‘not fighting’. “Sanders did not want to fight, I had a plan,” Johansson always claimed. Johansson was eventually awarded a silver medal for his final appearance.

When Sanders finally turned professional in 1954, he was on his own in many ways. He scraped together some fights, hard fights and in October of the year he fought back-to-back gruelling 10-rounders with Bert Whitehurst. The first was a draw, Sanders nicked the rematch and then about six weeks later he fought for the New England Heavyweight title against Willie James. There is a claim that Big Ed complained about headaches before the fight. On the night it was hard, too hard and in round 11 Sanders was dropped. He never got up. He died after surgery. The professional boxing career of the Helsinki heavyweight gold medal winner had lasted just nine months, an anonymous passing in every way.

The win by Sanders in Helsinki was nearly 70 years ago and since that win, which was 17 Olympics ago, only six men have won the gold in the top division and then won the heavyweight championship of the world: Joe Frazier (1964), George Foreman (1968), Lennox Lewis (1988), Wladimir Klitschko (1996), Alexander Povetkin (2004) and Joshua (2012). It is a stark reminder of boxing’s hard path. It is also cruel; the level of expectation can be savage.

Big Fraze would have had an up-close and very real look at what it takes as he sat through the Parker and Chisora brawl. Perhaps it should become a necessary watch for any wannabe fighters considering a professional career.

When Chisora and Parker had finished, Buatsi told Mike Costello that watching the two heavyweights had made him fully aware of the sacrifices necessary. That’s good; a lot of fighters need that urgent reminder, a reminder that it takes a lot more than a medal at the Olympics in our business.