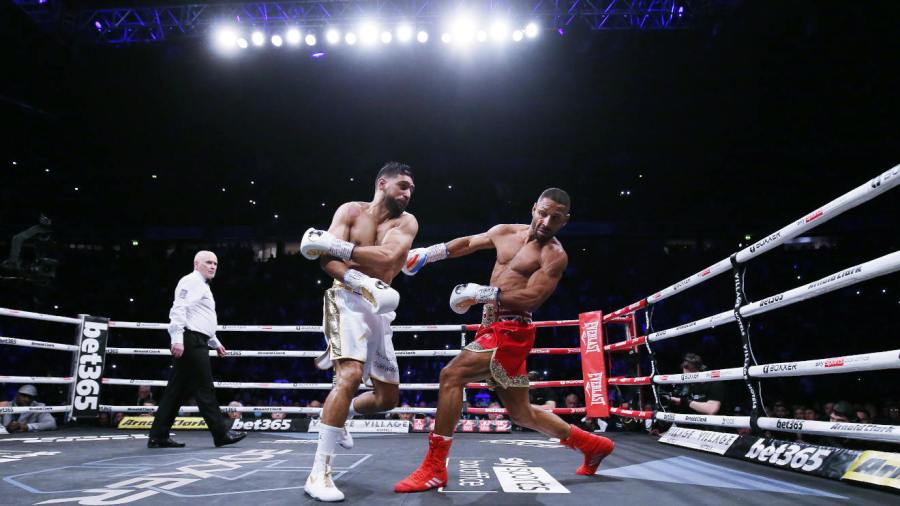 In the end survival was the best outcome Amir Khan could muster against Kell Brook. Matt Christie reports from Manchester

AMIR KHAN’S brilliant career is surely over. Kell Brook, after pursuing Khan for 17 years, finally caught up when the one-sided showdown was stopped in the sixth round. Khan knows the game is up. He likely knew it beforehand, too.

Khan and his team tried to eke out every possible advantage, toying with Brook’s emotions during some bizarre fight week squabbling and even forcing him to change his gloves moments before the opening bell. Of course, what really matters is what’s inside them. Khan, a shadow of his former self, could do nothing to repel Brook’s fists once the contest began.

There is no place to hide inside a boxing ring when the cruellest of sporting truths becomes apparent. As he made his way to ring centre for referee Victor Loughlin’s opening instructions, Khan took a detour back to his own corner and said a prayer. Some will say it went unanswered. That he was still standing when it was all over suggested otherwise, however. In the end, survival was the best outcome Khan could muster.

Amir’s descent did not come as a surprise. This was his sixth defeat and the fifth that came inside schedule. He has been a damaged fighter since Canelo Alvarez raided his chin so violently six years ago. More recently, Khan looked poor when being thrashed by Terence Crawford in April 2019. The addition of Crawford and his trainer Brian McIntyre to his coaching team made no difference.

“I’m going to sit down with my family and my team and work out what to do,” Khan said afterwards as he admirably sat in front of the press with a bruised and swollen face. “I felt like this after [losing to] Crawford. I couldn’t get in the groove and I wondered if it was because Crawford was so good. But I couldn’t get in the groove again tonight which tells me something isn’t right.

The opening minute was exciting as Khan blazed wildly at his onrushing rival. Brook was unperturbed and, as a wayward blow whistled over his head, the Sheffield star stepped inside and cracked Khan with a left of his own. Amir wobbled drunkenly and tried to grab hold. Enlivened, Brook tore after the fighter who had tormented and teased him for so long. Two further blasts, both right hands, crashed into Khan before the end of the session. He did well to stay upright.

The second session was revealing, too. The Bolton fighter who won silver at the Athens Olympics 18 long years ago answered the bell like it was the last time he’d ever hear it. Already desperate and fearing the inevitable, Khan slung quick but inaccurate punches. Kell is not the fighter he used to be, either. At times he too would swing and miss, though the ease of his victory suggested he might always have been all wrong for Khan.

“I am a fighter and I like the competition,” the winner said about his future. “I like being a fighter and I always will. [But] it’s the fighter who is always last to recognise when it’s time to say goodbye. I don’t want to be one of those fighters who fights for too long.

“He knew that I was coming hard, no matter what. Timing beats speed and that was the case tonight. He has very fast hands but I knew straight away, soon into the fight, that it was my fight.

“I knew that nobody would remember the 42 fights I’d had before. I would be remembered for this one fight. And no disrespect to Khan, but it was easy for me in there. I did everything they wanted me to. I was the first in the ring, I even changed my gloves before the fight because they wanted me to. And I still took care of him.”

Khan’s lone moment of success was fleeting. Two minutes into the third a right zipped over Brook’s guard and into the skull that had been fractured twice in the past. But if Kell was concerned about the eye sockets that had been broken by Gennady Golovkin and Errol Spence Jnr, he didn’t show it. That he stepped foot inside a boxing ring again after such horrific injuries should tell us all we need to know about Kell Brook the fighter. In sharp contrast to his opponent, he retained his composure throughout the contest. A right cross thudded into Khan before he was bundled to the mat at the end of the round. Admirably, it would be the only time he lost his footing.

That Khan stood up to whack after whack said two things. One, that his punch resistance has always been judged too harshly and, two, Brook’s power has diminished since his peak. Amir could do nothing but take it, however. Though he circled the ring, changed direction and stole some time, nearly every Brook attack threatened to end the bout. A right hook, a left jab and a right cross each caused Khan to stagger in the fourth. But Amir saw them coming and braced himself for each impact. His dogged desire to stand and fight is something that hasn’t been affected by time.

The fifth was uncomfortable to watch. There were murmurs from some seasoned ringsiders that Khan’s corner should wave the white flag. But Amir would never allow himself to be retired, particularly on this night. A night in which we didn’t see the best of Khan or Brook but a night and fight where the emotion was palpable.

“[That was] the best atmosphere I’ve ever fought in,” Khan said. “No excuses the better man won. I never expected that from him, he put on a great performance. At the end of the day, we have rivalries but after a punch up, we can be friends. I respect him.”

Khan was rescued 51 seconds into the sixth by the referee. Loughlin’s mercy stoppage was perfectly timed as Amir reeled back to the ropes under the constant pressure. The shellacking was complete and as Khan briefly and meekly objected before lowering his head in disappointment, Brook roared triumphantly. The trainer who has known Brook since he nine years old and coached him on and off ever since, the trainer who always knew his charge had the beating of Khan, burst between the ropes to hoist Kell into the air.

“I’m glad he got it out of the way,” said Dominic Ingle. “You have to give Amir Khan credit for taking the fight, because he always knew it would have been a hard fight. That’s the way it would always have gone, I believe.”

If Brook continues to fight he runs the risk of going the same way. There was talk of Conor Benn or Chris Eubank Jnr. Neither fight is appealing. It is surely unlikely that any opponent could persuade Brook to put his body though another hellish training camp. Only Amir Khan could have motivated Brook to be so impressive at this stage of his long and punishing career.

Whatever comes next for Brook and Khan, the story of their rivalry is over. It began in sparring sessions when both were amateurs in 2003. It was mentioned on the pages of Boxing News for the first time in 2005. Kell was always so eager to test himself against Amir Khan it became an obsession. The ghosts can now be laid to rest. He wiped out Amir Khan, just like he always said he would. And Khan, one of the best and ballsiest fighters this country has ever produced, was courageous to the end.

There can be no better way to say goodbye. It would be fitting if the old enemies walked through the exit door together, with their 35-year-old heads held high and their faculties for now intact.

The Verdict Brook puts the icing on a cake that had been baking for a long time.