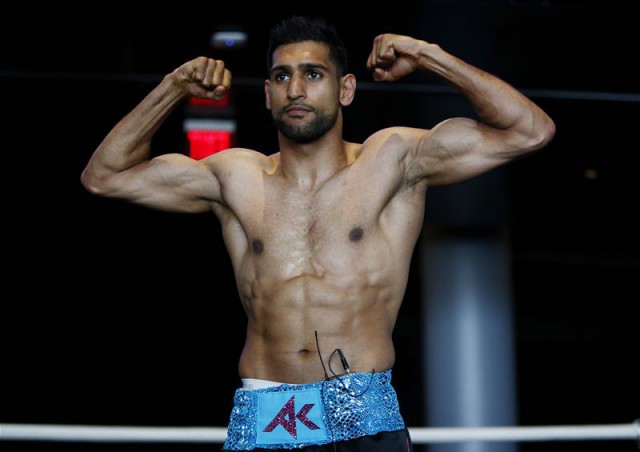 But the former light-welter world champion Khan does not think Thurman deserves a fight with Mayweather, writes George Gigney

AMIR KHAN is open to a fight with Keith Thurman if he beats Luis Collazo this weekend, but doesn’t feel the unbeaten American should get a fight with Floyd Mayweather.

The 28-year-old is still holding out for a lucrative showdown with the pound-for-pound king, while Thurman faces Collazo, who Khan outpointed last year, in Florida on Saturday night with his WBA ‘regular’ welterweight world title on the line.

While still not agreeing to a fight with undefeated IBF champion Kell Brook, Khan insists he would fight the hard-hitting ‘One Time’ in the future.

“I would definitely be interested in a fight with Thurman if he wins,” he said.

“I’ve never ducked any fighter and a fight with Thurman is one I would certainly be open to. He’s undefeated and we have two explosive styles so it would be a cracking fight and one not to miss.”

Thurman, 26, has also called out Mayweather, who holds the ‘Super’ version of the WBA’s welterweight title.

Mayweather has previously stated his September 12 fight will be the last of his career, making the stakes even higher for those clamouring to be in the opposite corner.

However, Khan does not feel Thurman should be the man who Mayweather will potentially close out his career against, insisting Keith does not bring anything new to the table.

“We’ve seen Mayweather in with guys who can punch like Marcos Maidana and  [Saul] Canelo Alvarez and handle them so I think the public want to see something different,” he claimed.

“Styles make fights and Floyd has seen Thurman’s style before.”

AMIR KHAN IS THE FAVOURITE TO BEAT KELL BROOK