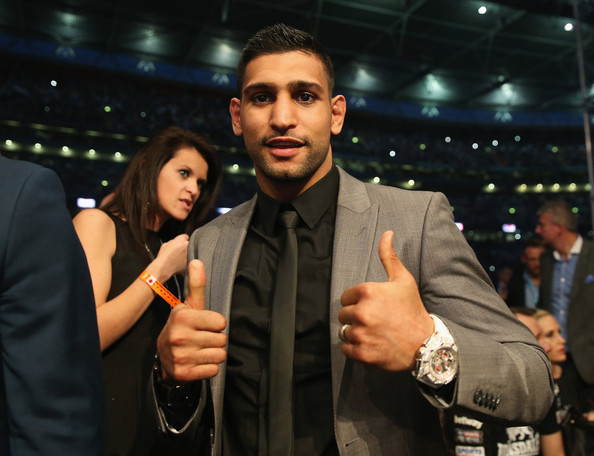 FORMER light-welterweight world champion Amir Khan has tipped Floyd Mayweather to come through his challenge with Marcos Maidana as he eyes a potential future fight with boxing’s pound-for-pound star.

The Bolton native was highly impressive in his last outing against Luis Collazo at his first fight at welterweight, and will now be ringside in Las Vegas after resolving Visa issues that meant he was unable to travel on Thursday morning.

Khan lands on Saturday afternoon and will be on-hand to cast his eyes over Mayweather and fully expects the current two-weight world champion to outsmart and outthink his way to victory over the hard-hitting Argentine, live this Saturday night.

“The first fight surprised a lot of people, no one expected Floyd to be in such a tough fight with Maidana. Maidana did himself a lot of credit in that fight and gave Floyd problems that not many people expected to see,” said Khan.

“Nevertheless, I think this fight Floyd will be a lot more composed and will know what he’s getting when he faces Maidana. The thing with Maidana is he tends to throw shots from weird angles and it can take you out your stride at first.

“Having shared the ring with him now, I think Floyd is going to be smart, box from the outside and maybe leave Maidana chasing his shadow,” he said.

The 31-year-old Maidana gave Mayweather his toughest fight in years when they first clashed in May.

Despite partial success for Maidana in his gameplan of pressurising the 11-time world champion first time around, Khan believes you have to have more than one trick when taking on a fighter of Mayweather’s calibre.

“Maidana made it a very rough and rugged fight and showed Floyd no respect first time around. His gameplan was to go in there and treat him like he was a nobody. In a way it definitely worked for him because he gave Floyd a tough fight especially early on.

“But against Floyd you can’t go in there with one strategy and think it’s going to see you through the fight because he is very clever, very smart and makes adjustments,” said Khan.

“He’ll do something different and ask you questions and poses different problems round by round. So you might win the first, second and third round but it’s about seeing it through and in the end Maidana just couldn’t do it.”

Many within boxing circles have tipped the 27-year-old Khan himself to be the one fighter who could give Mayweather a real run for his money.

With a plan to be out again at the end of this year Khan is hoping to throw his name into the sweepstakes to take on boxing’s biggest draw.

“It’s a fight that many want to see happen just because our styles would make a very interesting clash. If I keep winning then I think it’s a fight that could definitely happen in the future. Floyd has said the same thing to me in the past,” said Khan.

“For now, I’m out again in December so I’m looking to get my opponent named for that and putting on a great performance in my next fight. But if it makes sense for both sides then it will be a fight that could happen.

“I don’t want to put a timescale on it but I got into this sport to fight the best and at the moment Floyd is ahead of everyone so it would be great to test myself against him,” he said.

It is the speed of the Olympic silver medallist which he deems the key component in overcoming the unbeaten Mayweather, who has a flawless 46-0 record.

“I really believe speed is one of the key components in beating Floyd. Speed of hand and speed of foot – even speed of mind. It’s not the only thing but it’s very important, as is having a good jab and being able to answer the questions he poses,” he said.

“You can’t be one dimensional against Floyd because over and over in his career he has shown that he makes changes to whatever style his opponent comes with.

“Yet, when you look at it up until Maidana the people who have troubled him the most have been people with speed and good movement, those are things I possess,” Khan told BoxNation.

Many believe a Mayweather-Khan superfight at Wembley Stadium could exceed anything seen before at the home of English football.

Khan, however, would happily welcome a bout on home soil but is aware any decision would ultimately be Mayweather’s.

“I would love to bring a fight of that scale back home but I think it would be very difficult. Floyd tends to have all his fights at the MGM Grand. I know he has spoke about coming over here and fighting so you never know.

“He has a big fanbase here and I have a big fanbase so it would make sense. To fight Floyd at Wembley would be an unbelievable experience but at the end of the day Floyd is in the position where he decides who and where he wants to fight,” said Khan.