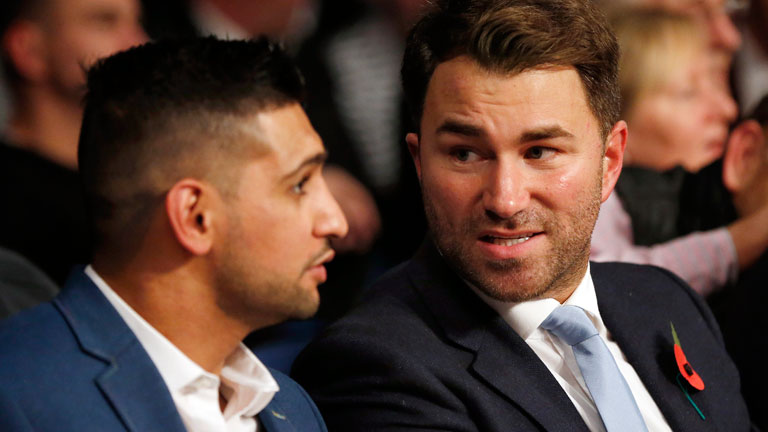 Talking exclusively to us, Bolton's finest reveals that Amir Khan vs Kell Brook may happen this year, but Danny Garcia is a serious option too

IT’S the news British fight fans have been longing to hear: Amir Khan vs Kell Brook could happen this year. The Sheffield man defending his IBF welterweight title on March 26 against Kevin Bizier complicates matters to an extent, as does Khan being named the mandatory challenger to the WBC title which will be disputed this weekend by Danny Garcia and Robert Guerrero, but Amir remains keen on a long-awaited showdown with Brook.

“I’ve always wanted the fight and said it will happen,” Khan told Boxing News. “I think it is closer to happening than it was a year ago but he’s fighting at the end of March now and I want to get out fairly soon too so I’ve left all negotiations with my team for my next opponent. There’s a few options we’re looking at and over the coming weeks we’ll have a clearer idea of where it all stands.”

If the Brook fight fails to come to fruition – there may be the possibility that Bizier could be paid to step aside, allowing the bout to occur –  Khan has another option in his ordered shot at the Garcia-Guerrero victor, though feels he should have been disputing the vacant championship.

“I am the number one in the WBC rankings and their Silver champion so I think I should have been fighting for it against the number two ranked fighter which is Garcia,” Khan pointed out. “But nevertheless I’m ready and hope to fight the winner of this fight. I would love to get a chance to avenge my loss to Garcia and at the same time pick up the welterweight title. If we were to fight again it would be a different outcome. I would outbox him and stick to what I was doing in the opening three rounds of our first fight. Then when the time is ready and I can see for sure he’s ready to go I would finish the job. It would be a very exciting fight.”