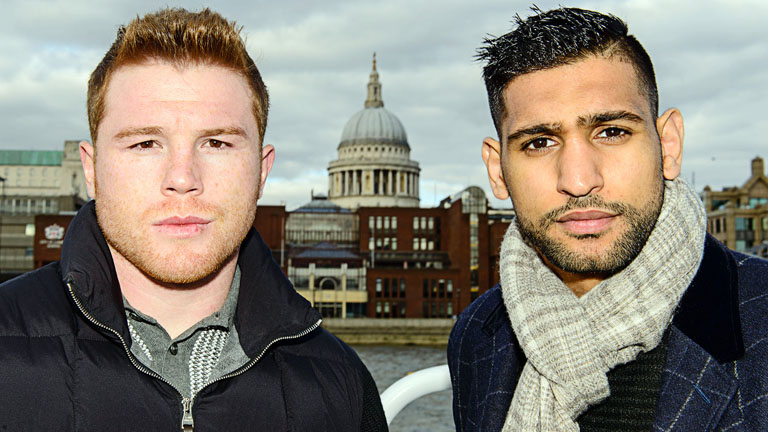 Amir Khan is promising the fight of his life against Canelo Alvarez, writes John Dennen

AMIR KHAN knows he has to be on his toes against WBC middleweight champion Saul “Canelo” Alvarez. Khan is moving all the way up to 155lbs, a weight he’s never competed at before to take on the skilled and heavy-handed Mexican at the T-Mobile Arena in Las Vegas on May 7.

“It’s been tough, obviously, working on these strategies with my trainer Virgil Hunter, being more focused, because I know that one little mistake in a fight like this could get me in trouble, so I’m making sure that I’m not making any mistakes from being in the ring, scoring, or being in the gym training, doing work, or even outside the ring when I’m recovering and how long I’m going to be keeping the weight on,” Amir said. “Because I want to walk into this ring strong. I don’t want to be too light because by being too light, it won’t make me real strong.”

Khan knows he can’t risk trading for too long with Alvarez. “I’m up against a very big middleweight fighter, Canelo, he’s a middleweight world champion. We’re doing everything right. I mean, look, my skills are what’s going to win me this fight. I know I’m not going to be stronger than Canelo in any way. I’m not going to be thinking I’m stronger than Canelo, but I’m going to stand with him and fight with him. I think my skills in this fight will win me the fight,” Khan said. “I don’t think that Canelo’s experienced speed with combinations and speed with power… I would say I will definitely shock the world come May 7, otherwise I wouldn’t take the fight.”

Khan clearly believes he has developed a plan which will undo Alvarez. “I’ve been watching video of Canelo, and day after day getting more and more confident that I can beat this guy,” he concluded. “So I’m really looking forward to it, and we still have another three to four weeks left of training where I’m going to be focusing, and I’m still going to be giving 100 percent so when I do walk into that ring, I’m not only going to do myself proud, but I’m going to do my family proud, I’m going to do my country proud, and I’m going to bring back home the belt.”