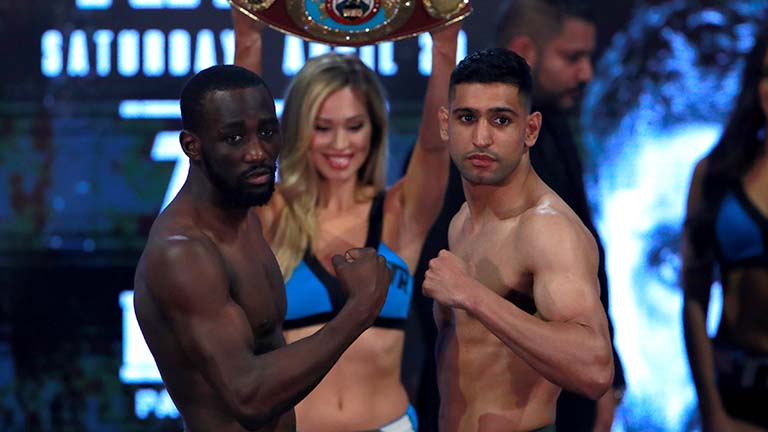 What the strange case of Amir Khan tells us about the sport today, writes Alex Reid

THERE are two types of courage in boxing. One is the type of straightforward, physical bravery we all admire. Alone when the bell goes, risking life and limb, each fighter knows that they could be pushed to the limits of their physical bravery and pain tolerance when they step between the ropes.

In short, the qualities every boxer possesses that most mortals are awed by.

Yet there’s another, more complex, type of courage that elite boxers must possess: competitive courage. At the highest level, we ask boxers not just to risk their health but to endanger their reputation and pride by choosing to face the very best in their division, i.e. career-defining fights they might well lose.

An example of these two types of courage diverting is Riddick Bowe, the heavyweight champion from the 1990s who showed superhuman reserves of physical fortitude in his trilogy with Evander Holyfield. Yet when it came to taking on the threat posed by his Olympic conqueror, Lennox Lewis, Bowe infamously dropped one of his world titles in the bin.

Understandably, Bowe’s reputation suffered and we’ve seen other cases where fans and the media have run out of patience with boxers handpicking opponents. For Roy Jones Jr, there was talk of a boycott (or ‘Roycott’) of his mismatched mandatories against the likes of policeman/boxer Richard Frazier. The idea was to force the pound-for-pound king into taking on harder challenges.

This problem is even more prevalent in 2019, as divided world titles and separate TV deals make it even trickier to force the best to fight the best. Yet promoters have found an ingenious solution: the no-lose super-fight.

Simply make a fight between two superstar fighters where one boxer is a clear favourite – often due to a hefty weight discrepancy – and everybody wins. TV companies can hype a fight using two names familiar to even casual fight fans, promoters can put a David vs Goliath spin on it, the underdog can speak about how energised they feel at this new weight, while the favourite will laud the guts of their opponent.

After inevitable outcome on fight night, both boxers can leave with their reputations relatively intact. The heavy favourite has another big name on their resume; the defeated underdog receives plaudits for even attempting the impossible and praise for any minor success they achieved.

What we don’t get is any further to the truth of what boxing – of what elite sport – should be about: finding out who the best in a particular division actually is.

A perfect example of this type of chicanery came in 2016. The world was baying for Gennady Golovkin vs Canelo Alvarez at 160lb while, in the UK at least, there was a huge appetite to see Amir Khan face Kell Brook at 147lb. So what did boxing serve up in the space of five months? Alvarez vs Khan, then Golovkin vs Brook.

Two fights where absolutely everyone knew the outcome, yet all four fighters could emerge with reputations, if not health, relatively undamaged. Certainly losing to these world-class middleweights was far less damaging, less definitive, then Khan or Brook losing to a domestic rival in their own weight class.

Of course, Alvarez and Golovkin did eventually face off in September 2017, so it needn’t be a permanent problem. But for every big fight that does belatedly get made, there are many that do not.

An obvious example in 2019 is Mikey Garcia vaulting two weight divisions from lightweight, keeping safe his world title belt (and avoiding Vasyl Lomachenko) to lose to Errol Spence at 147lbs. Such was the one-sided nature of this weight-handicapped super-fight that Garcia’s standing in the sport was probably damaged all the same. Yet nowhere near as definitively as it would’ve been had he lost to Lomachenko at 135lbs.

Indeed, weight does not always need to be involved. This weekend, Amir Khan takes on Terrence Crawford at 147lbs in a fight where the size of the participants is not the defining issue. Yet some of the same factors are at play. Khan has repeatedly stated that there was millions more on the table for him to fight Brook than take on Crawford; that he is actively taking on a harder fight for less money. The reason? To insure his “legacy” by beating one of the sport’s pound-for-pound best.

Perhaps. Another way of looking at it is that, whether Khan consciously acknowledges it or not, the loser of the Khan-Brook fight has their sporting career defined by that result. That is a contest where the result truly shapes the legacy (to borrow Khan’s word) of the pair. If Khan loses to Crawford, he can talk once again how he faced the world’s best, claim there’s no shame in coming up short and emerge with his reputation more or less as it was before.

It is perhaps harsh to single out Khan. In the ring he – as much as any other fighter – has displayed raw, elemental, primal courage. For all the occasions of him getting knocked down or hurt, what sticks is the image of how often he found it within himself to get up and try to fight back. There’s no questioning his heart.

Also, the problem is simply not with fighters alone. Just as often it’s managers, promoters or TV execs whispering into a boxer’s ear, telling them they don’t really need this 50/50 fight in their own weight division; not when there’s glory (and money) to be found elsewhere.

Yet, given how slowly 2019 has begun – admittedly after a few strong few years for the sport – it’s clear there is a problem. At least with the very best in the sport; those whose stock and reputation are so high that they have plenty to lose.

Climbing weight divisions used to be the preserve of great champions seeking out a new challenge when they’d cleaned out their own class. Now boxers are leaping around from high to low, cherry-picking matches to suit them.

To see the even-weight fights we all want (from Crawford vs Spence to Lomachenko vs Garcia and beyond), we need to be less accepting of these superstar mismatches where nobody really wins or loses. The bouts that masquerade as marquee fights, while actually standing in the way of the real thing.