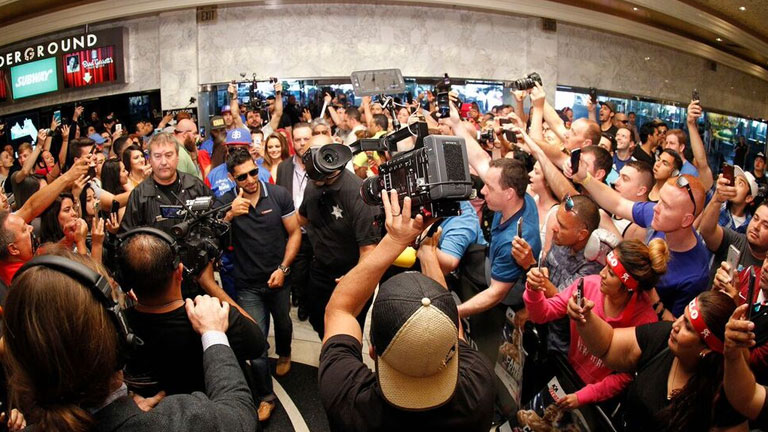 AMIR KHAN and Canelo Alvarez arrived at the MGM Grand lobby today, ahead of Saturday’s showdown at the brand new T-Mobile Arena, situated across the Las Vegas strip from the famous fight hotel.

Both fighters received a warm welcome from the crowd, but those in attendance appeared predominantly Mexican as Alvarez’s arrival generated a roaring reception.

But Khan remains in a confident mood.

“All the hard work and training has been done,” said the Englishman. “I have a great team, and I am conditioned and ready to fight and represent my country of England. Mentally, I have prepared by praying, being with my beautiful family, and the support from my fans. Even though Cinco de Mayo is a Mexican holiday, we are going to see a lot of British flags come Saturday night.

“This is a huge fight, as Canelo is a star in Mexico and America. I know I’m here as the underdog, but I’m ready to win and take this WBC belt back to my home in England. I wouldn’t have taken this fight if I didn’t think I could take it. I have trained for everything and worked on my speed and my power.

“A win against Canelo would be one of the biggest wins of my career because he is a superstar, especially on this Cinco de Mayo weekend in front of everyone. I have trained and worked on my speed and my power. The fans will be very happy on Saturday night. I will be the new world champion. I think it will be difficult to knock Canelo out, but I know I can give him a boxing lesson.”
The WBC middleweight champion dismissed Khan’s chances while thanking his supporters.

“There is a difference between wanting and doing,” said Canelo. “On Saturday night, we will see who will give who a boxing lesson. I want to thank all of my fans for the support. I am very honored to be celebrating on Cinco de Mayo, and I hope to put on a great show on Saturday night. I’m training hard for twelve rounds, I’m ready to go all of those rounds, and if the knockout presents itself—I’m ready to take it.”

How much is Khan earning?