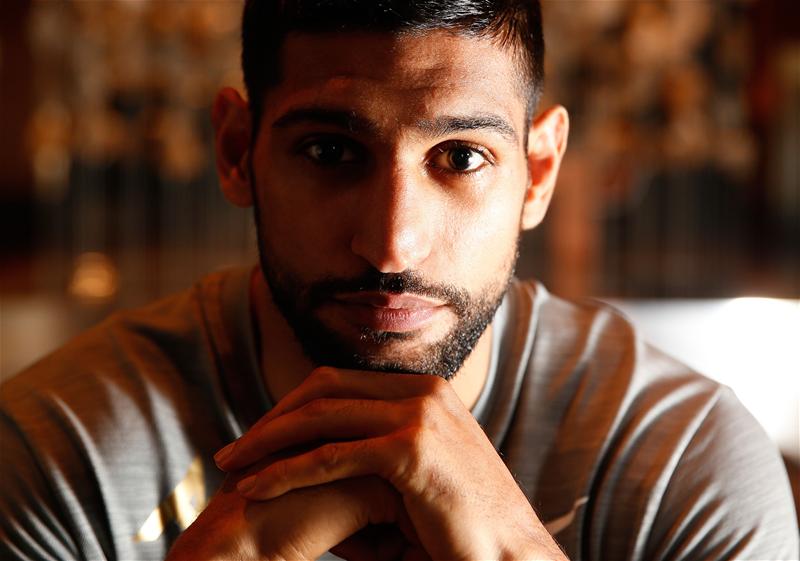 AMIR KHAN insists he is focused on fighting Devon Alexander on Saturday despite much talk surrounding big fights in 2015 should he win.

Khan, who has been away from his family for seven weeks and did not celebrate his 28th birthday yesterday, has made sacrifices so he will be ready to fight Alexander.

He has sparred more than 160 rounds, and claims he has never felt better.

“Alexander is a very dangerous opponent and I’m not looking past this fight,” Khan said. “He has a lot of tools and a lot of skills, he’s going to come in to the fight with a game plan, wanting to beat me but I think I’m hungrier. Speed-wise he’s quick but I think I’m quicker and when it comes down to power I think I’m stronger as well, so it is going to be like a game of chess at times and at times it will be a fight. I’ve been watching a lot of videos of Alexander and in his last fight, against Jesus Soto Karass, he stood and fought, but with Soto Karass you see every punch coming, you can block and trade with him, and then he [Alexander] got beaten by Shawn Porter, my style is quicker and stronger, and we know what to do. I’m going to stick with the game plan Virgil [Hunter] has given me and stay very calm. If we want to go to the next level up, we have to win this fight.

“For the loser I don’t think he will ever get the chance to get that big superfight against the likes of Manny Pacquiao or Floyd Mayweather but this is boxing, anything can happen nowadays. If Chris Algieri gets the chance to fight against Pacquiao and someone gets one good win to get that big fight [it happens] but the one I’m chasing is the Floyd fight. I can’t afford to make mistakes or get beat so it’s all about being smart, going with the game plan and following my path, and that’s to fight the best out there.”

He is not just talking up the fight. He knows he is in a strong position in the queue for big fights and claims he’s never been more ready.

“This is such a massive fight for me,” he continued. “It shows how big it is that it’s at the MGM and topping the bill there, I’m going to be focused and do what I do best, it will show what I’m able to do with Virgil Hunter. I feel much better now than I did at 26 [years of age]. I feel stronger, healthier and fitter, I’m in better shape, I’m at a better weight and I feel naturally better. As I get older, it is not as easy to get fit or as strong so you have to work harder, train harder, diet to make weight easier so by doing those things I’m only improving and starting to make myself a better fighter.”

He nearly fought Alexander at light-welterweight but believes he is facing a different fighter now they have both moved up 7lbs to welterweight.

“He stands there a little bit more,” khan explained. “He takes shots but he gives a lot back, he doesn’t move as much as he used to, he’s more static, throws a lot of shots and he kind of loads up on a lot of punches that I see. We just have to stick to our game plan and be smart in this fight and I think the jab, the lateral movement and the angles will be important in this fight.”

He reckons it is important not just to win but “to win with finesse” and believes Alexander might feel the pressure fighting in Las Vegas for the first time.

“He has to win this fight,” Khan said. “He’s not really a big, big name where I think it would be hard for him to get a massive fight again if he loses. But this is boxing. Anything can happen. One fight changes everything.”

Khan has this week spoken of being a family man and missing his daughter, who he has at least seen via Skype.

He says his little girl is now his motivation.

“I want her to grow up and be able to say, ‘My dad was a great champion.’ That’s the biggest motivation, when your little girl goes to school and her friends say, ‘Your dad was a great fighter.’”

He said he will not draw any timelines on how much longer he will fight for but will see how he feels. He attributes strength and conditioner Tony Brady with his new lease of life, as well as trainer Hunter, and he’s aware that he is one of a very few who hopes the Mayweather-Pacquiao fight doesn’t happen as he hopes to be in the frame to fight them.

“Mayweather probably wins [if he does fight Pacquiao]. Pacquiao is open a lot, he gets caught with a lot of shots. His workrate has dropped a lot, in my opinion. Age is going to get to you, you’re going to be old one day and you can see that age now. In Mayweather and Pacquiao. They’re still great fighters, the things they are doing most 25 year old can’t do.”

Khan said comments made by Freddie Roach, that Pacquiao had dropped him in sparring several times when they were gymmates, were false. He denied that it had happened but said the Filipino could give him a harder night’s work than Mayweather.

“He could never say he got the better of me or outclassed me in a spar, let alone drop me,” Khan said. “He never got close to knocking me down. Stylistically I think Manny would give me a tougher fight than Mayweather. Styles make fights and I think Mayweather would be like a game of chess whereas Manny would be a fight where you have to throw a lot of shots and there would be a lot of pressure as well. But when you say power, Manny’s not knocked anybody out for a long time, plus he’s gone up and down in weight and he’s got older and that can affect your power.”

Could Khan’s near future include Kell Brook should the sport’s megafight eventually happen?

“I’m not saying no to it,” he replied. “It’s probably something we will look at. We will see how Kell Brook comes back, he might not be ready after that injury to his leg so we’ll see how he performs in his next fight. Then he knows exactly where he is, too. So that could be a possibility. I’ve got big fights ahead of me, big superfights.”

For a full interview with Khan, and a preview of his fight with Alexander, download the latest Boxing News