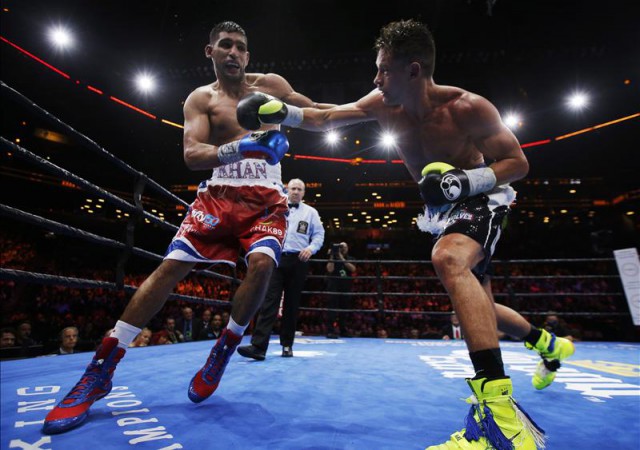 Khan is impressed with the fight Algieri gave him, writes John Dennen

“I thought I worked well inside. I’ve never done a lot of work in the pocket like that and I plan to do more of that in the future,” reflected Amir Khan. “I give Chris a lot of credit. He came forward a lot more than we thought he would and he had a big chin tonight.

“Chris gave it his all tonight. This is the best Algieri we’ve seen in a long time, and if he’d have fought Manny [Pacquiao] that way he might have won.

“Everyone knows I want Floyd [Mayweather] next after all the talk about it, but when you wait and hope for something for this long it can set you back. I don’t want to overlook any other fighters, including Chris.

“My first show with Premier Boxing Champions has been great. The New York crowd was awesome and really got into it. The promotion was excellent and I’m proud to be a part of this team.”

Algieri believed he got to Khan. “I thought I pressured Khan well and got my touches. He definitely didn’t like it when I got into his body,” the New Yorker said. “I thought I hurt him several times, but Khan’s a cagey fighter and he spins off. I guess the judges liked that tonight. I would think the cleaner, harder shots would get a little more respect.

“I haven’t thought much about after this fight. I’m disappointed, but I’ll watch the film from this fight and we’ll go from there.”

After his victory on the undercard over Bryan Vasquez, Javier Fortuna said, “I’m very surprised that the fight went the distance. Vasquez is a strong fighter. After the fifth round, I was boxing to score points.

“I was never really hurt by Vasquez, but I hurt my own hand on his head.

“Vasquez didn’t really affect me throughout the fight. The swelling on my eye is from a headbutt.

“The biggest key to my success tonight was my training. Before this I didn’t have the stamina that I needed. However, after my work with Hector Bermudez leading up to this fight I was more than ready.

“Becoming a champion here in New York is huge for me. I’m very proud of my performance tonight.”

Bryan Vasquez reflected, “My style is to box and then move. Fortuna fought a smart fight tonight. He wouldn’t engage me and fight.

“Fortuna used his head and elbows a lot tonight, but I don’t want to use that as an excuse. I tried telling the referee, but nothing was done.

“I worked very hard for three months of training to get to this fight. I hope I won over some fans today because I fight to please them.

“Hopefully I get a rematch because this is not the end of my career, and I’d love the chance to take that belt from Fortuna.”

CLICK HERE TO READ KHAN ALGIERI AS IT HAPPENED