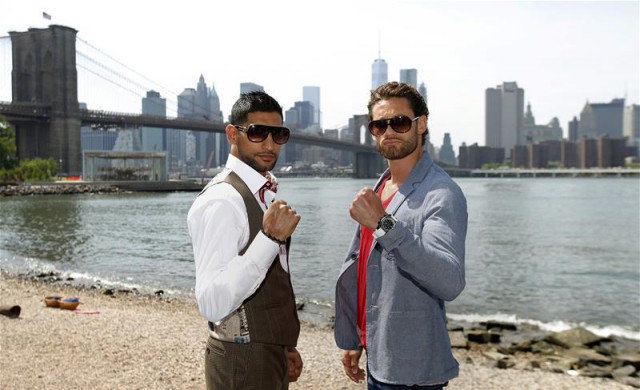 Khan, Algieri and other fighters on the bill speak ahead of the May 29 bill

“I really believe that I have the movement, the skills and the technique to beat Chris Algieri and look spectacular doing it.

“Algieri has been in the ring with big names before so we know that’s not going to scare him and he won’t get nervous. I’m going to be ready for anything he brings to the table.

“This is going to be an entertaining fight because of our styles. We both like to throw a lot of punches and there will be a lot of movement. This will be a more skillful fight and I think the fans will enjoy what they see.

“I’ve always wanted to fight here at Barclays Center and I really am excited to put on a great performance for all the New Yorkers.

“Virgil Hunter has been great for me as a fighter and he’s helped me really understand the sport of boxing. I’ve worked on my technique and my defense and really just everything.

“Training camp for me has been really good. I’m focused on my opponent and I’m not going to make any mistakes. It’s going to be a great performance from me on Friday.”

“This is going to be a great fight with two fast-paced boxers. It’s going to be very exciting for everyone watching.

“Working down in Florida with John David Jackson really refreshed a lot of things in boxing for me. I got to see new things and try new things. I learned a lot.

“The only thing that matters is proving something to myself and I do feel like I have to prove something. I wasn’t happy with my last performance at all. I know I belong here at the elite level and it’s time for me to prove it.

“I like to challenge myself and this is a great opportunity. I’m ready for this, I will challenge anybody in the welterweight division.

“I feel very comfortable being here in New York and I’m happy to be back at Barclays Center.

“For me it is an honor to be here in Brooklyn. This will be a great night for all of my fans.

“I hope my opponent doesn’t have any excuses on Friday, because I’m going to knock him out.

“Everyone here is going to see a great performance and I can’t wait to get in the ring.

“I’m a strong fighter and I am looking forward to showing everyone what I am capable of.”

“I’m very thankful to be here and I look forward to a great fight. I promise it’s going to be a war.

“I’m an exciting fighter who always comes to fight. This is my time and I will not disappoint.

“Fighting in New York is a great opportunity. I want people to see that Costa Rica has great fighters.

“I know I have a tough opponent, but he has never faced anyone like me. I’m going to give it my all and I hope he does the same.”

“I feel like having a daughter has given me the kick in the rear that really has me focused on what I want to do, which is becoming a world champion. I want to give her a better life than I ever had.

“My intensity and focus has never been higher. The fun part of boxing is back again.

“I told my daughter that ‘daddy is going to give you the world.’ So I guess I need to become a world champion to give her the world. Her first word might be ‘champ.’

“I’m so thankful to all the people at Barclays Center that allow me to continue to show off my talent and skills in this beautiful building.

“Fighting on this Premier Boxing Champions card is really special and amazing. When I went to the Olympics in 2012 we stayed in Bolton and worked out at Amir Khan’s gym, now it comes full circle.

“Fans can expect to see ‘spizazz’ from me. That’s a word I came up with back in my amateur days. I’m here to bring that ‘spizazz’ back, if you want to know what that is you have to buy a ticket for Friday night.”

“I don’t look past what is in front of me. I have a really tough challenge in front of me on Friday. I know she has an incredible desire to win and I’m ready for that.

“I’m a pretty aggressive fighter but I’ve been known to box. I go in there and make adjustments but I’m not afraid to throw punches.

“There was a really unfinished feeling after my last fight, I was disappointed. I expected more from my opponent. I wanted to put on a show for fans to remember.

“I definitely want to make up for my last fight this time and I feel like my opponent is on the same page with me about where we need to go to take this sport further.”