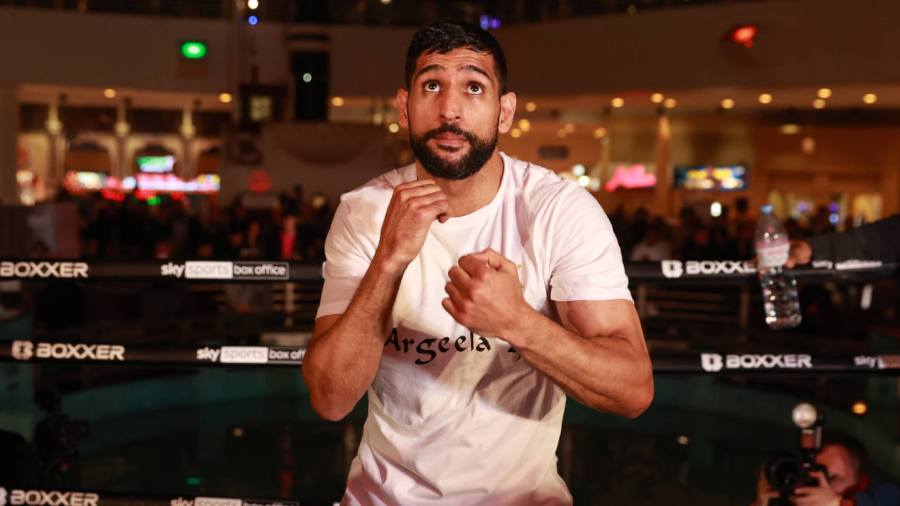 WHEN I was in training camp, I got injuries in training camp but I didn’t want to tell anyone about it because I didn’t want people to think, ‘Amir’s making excuses.’ I tore my rotator cuff, my tendon split in half in my right arm. It’s still sore now, I can’t lift it up much. Then my knees were hurting while I was in training camp. But I was still pushing myself hard and I think that’s when it hit me, ‘You know what, I don’t think I have it left in me.’ But I couldn’t let anyone down or the fans down, it’s such a big fight, I can’t say no to this fight, I can’t walk away from this fight, so I’m going to go ahead with it. I worked hard, don’t get me wrong, I trained very hard, I worked very hard for it but I didn’t have it in me. I was already done as a fighter. That’s when it hit me, in training camp. But it was just that I couldn’t let anyone down.

No regret because everyone would have hated me for not taking that fight. No regrets at all. In boxing there’s always a winner and a loser and at least people know that I gave them the fight that they always wanted. Maybe it would have been a different story if it was maybe a couple of years earlier, but it is what it is. On that night Kell Brook was the better fighter and he won.

I think I’ll be remembered as a fighter who never shied away from any fight. I tried to give everyone the biggest fights they ever wanted, give them excitement and have them on the edge of their seats. Win, lose or draw, it was always an exciting night whenever Amir Khan’s fighting. So I wanted to show that and I hope I’ve left that behind so people will always remember that Amir was one of the fighters who gave it his all when he stepped into that ring.

I wouldn’t do anything different if I could do it all again. Maybe taking the Kell Brook fight a little earlier in my career, but other than that, no. I’m very happy with the way my career went.

The defeat that hurt most was for the undisputed title against Danny Garcia. I was in that fight and I think I just let that fight go in my own way, which was silly. The best fight for me has to be the Marcos Maidana fight because it was the fight that catapulted me in America at that time.

I met Floyd Mayweather the other day. He was so respectful, really, really nice. He said you have had such a brilliant career. When that comes from someone like him, that’s amazing.

With these injuries I’m getting, if I were asked to get in a ring to do an exhibition, I would say, ‘hell no.’ I want to leave the sport. I want to walk away from the sport. I don’t even want to train. I want to enjoy this retirement and not walk into a gym for a least a couple of months.

Doing charity work, that gives me the same buzz and that’s something I’m going to do a lot more of now that I’m not a fighter. I’ve made my name. I’ve made my money and now I want to go and enjoy helping other people and putting a smile on their faces – especially third world countries and in poor places.