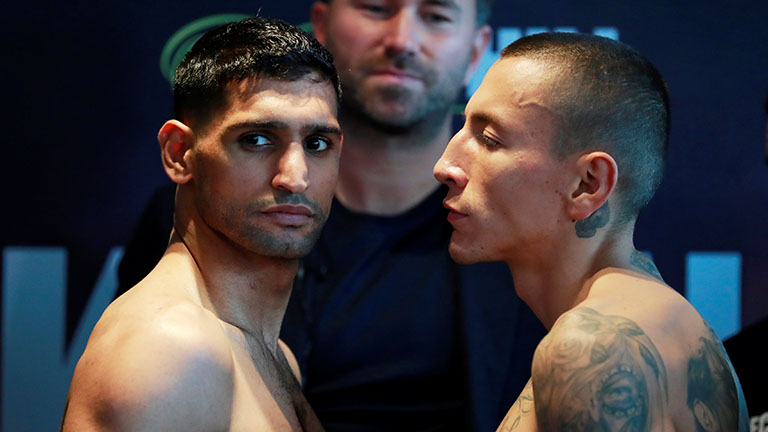 Amir Khan fight time and where to watch. Jack Figg has the details

Amir Khan fight time and where to watch it

WELTERWEIGHTS Amir Khan and Samuel Vargas battle it out this Saturday (September 8) at the Arena Birmingham, live on Sky Sports Action.

Here is all you need to know about Saturday nights event:

12 three-minute rounds in the welterweight division.

You can also use the Sky Go App to watch it on a smartphone, tablet or laptop. Or listen to it via the talkSPORT on radio via DAB digital radio and on 1089 or 1053 AM.

Welborn (23-6 7 KO’s) and Langford (20-2 6 KO’s) treated fans to a fight of the year contender in May. Langford was counted in the second round before suffering a cut in the next round, while Welborn suffered perforated eardrum on the way to capturing the title.

Fitzgerald (10-0, 7 KO’s) will look to maintain his unbeaten start to his career since turning professional in February 2016. Morris owns just one loss coming against Ryan Fields in February 2016, and beat Ryan Martin in December 2017.

Kelly (11-1 5 KO’s) is defending his Midlands Area title for the first time since beating Owen Jobburn in his last bout to claim the strap. Ball (9-0, 2 KO’s) is competing for his first professional title.

Yafai (15-1 8 KO’s) suffered his first professional loss against Gavin McDonnell (20-1-2 5 KO’s) in March, however, the Brit bounced back with a stoppage win against Jose Aguilar in August. Mairena (10-1-1 4 KO’s) is fighting for the first time away from his native Nicaragua.

Ritson (16-0, 10 KO’s) is set to challenge Francesco Patera (19-3, 7 KO’s) for the vacant European lightweight title in October. Ritson, the current British lightweight champion will use Amador (10-7, 1 KO) as preparation for that bout.