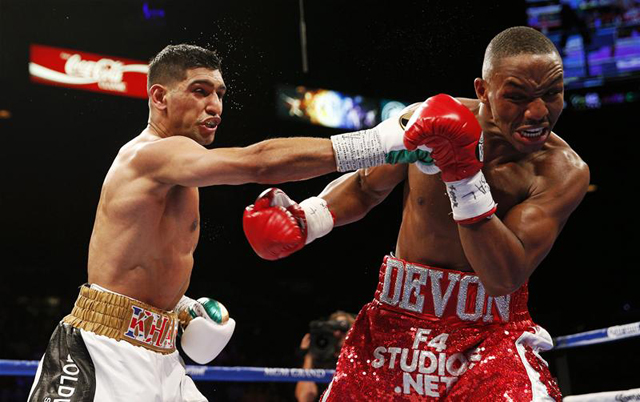 WINNING this fight is everything to me. I’m not looking past this Chris Algieri fight. I know it’s a very dangerous fight for me. Stylistically he’s very dangerous and I’m not going to be looking past it. If I do, I’ll have made a mistake. I’ve looked past fights and made mistakes. It will put me right back where I don’t want to be.

I have to be focused. I have to be disciplined in training camp, not looking past this Chris Algieri fight. I know there are big fights out there like Floyd Mayweather. I just have to stay focused and win this fight and go from there.

Technically I think overall he’s a very good boxer, moves well. He makes a lot of fighters fall short. He’s very skillful. You have to be on your ‘A’ game to beat him.

I’ve been watching a lot of videos like [Ruslan] Provodnikov. Even the Manny Pacquiao fight, there’s some good things he did there. It could be dangerous for me coming into this fight if I’m not on my ‘A’ game. I have to be one step ahead and make sure I don’t make any mistakes. Chris Algieri is a guy that if you make a mistake, he’s going to make you pay for it.

There’s people putting this fight down, and I don’t know why. At the end of the day, Chris has won a world title. He’s been in the ring with Pacquiao in his last fight. He’s a very good boxer, moves well, boxes well.

I take every fight seriously. I’ve made that mistake in the past. For example the Danny Garcia fight. I’ve fought some fights that I thought are going to be a walk in the park; I got hurt, I lost the fight. I’m not thinking any fight is going to be easy. Every fight I walk into, every person in front of me is going to be in there to win the fight.