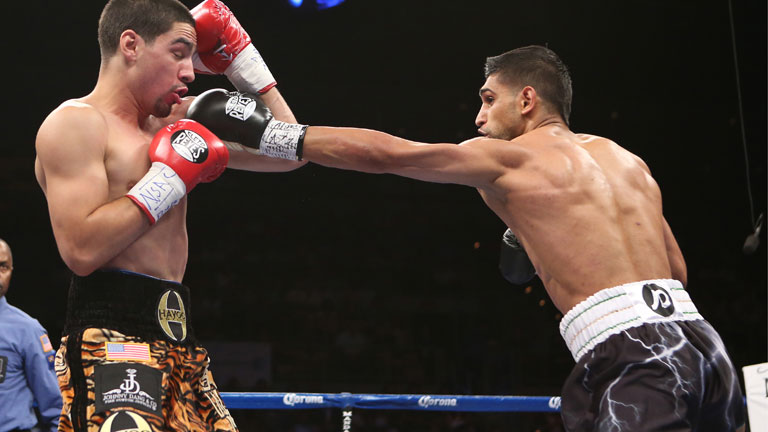 As the apparent next opponent in line for the winner, Amir Khan is perhaps best placed to preview Danny Garcia vs Robert Guerrero and he predicts the victor

AMIR KHAN is mandated to face the winner of this weekend’s clash for the vacant WBC welterweight title between Danny Garcia and Robert Guerrero – plus he lost to the former in 2012 – so who better to ask to preview that match than Bolton’s “King”?

“Guerrero has a come-forward style and is always looking to press and pressure his opponents,” Khan noted, exclusively to Boxing News, of the southpaw. “He throws a lot of punches and works every minute of every round. He doesn’t like to give guys he’s facing any time to settle or get into a rhythm. He’s got a lot of heart but can be a bit predictable and can be outboxed as Mayweather showed by setting traps and letting him walk into them.

“I think Garcia is the more naturally talented of the two. He can push a fight and be the aggressor but is also able to box if he needs to.  I think he prefers coming forward and he’s more used to fighting like that and carries some good power too. Perhaps at times there is an over-reliance on his left hook and his recent fights have shown opponents are figuring out how to take it away from him. I don’t think he likes facing guys who can box and move as he can appear a bit flat-footed.

“A couple of his last fights Danny’s not looked very impressive. He’s struggled against Lamont Peterson and Mauricio Herrera and they were fights that could have gone either way. I’m not sure if he underestimated them or what it was. Even when we fought I was outboxing him and went for the kill too early in our fight and he caught me with a shot that changed the momentum. He’s definitely gained in experience since we fought so that’s only going to help him improve. Plus the move up to welterweight will help.

“I think Garcia will win the fight. Guerrero himself didn’t look too good in his last fight. Though I think he’ll put up a better show this time around. I expect the early rounds to be where Guerrero will look to pressure Garcia and make him fight on the backfoot. He’ll probably win a few of the earlier rounds before Garcia pulls away with it over the distance. I think it will go to the scorecards but Garcia’s better boxing ability will see him through on the night.”