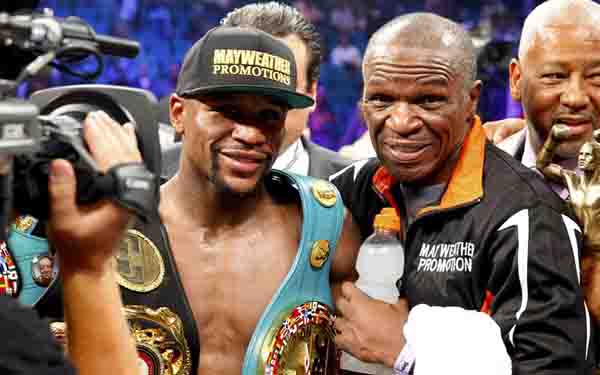 FLOYD MAYWEATHER senior, who coached his son, Floyd Mayweather to his defining victory over Manny Pacquiao on Saturday, was cool on thought of a Mayweather-Pacquiao rematch in the immediate aftermath of the ‘fight of the century’.

“I don’t think as many people who paid for it this time, will pay for it again,” Floyd senior said. “It ain’t necessary to do it again because the same thing will happen.”

Mayweather Jnr has one fight left on his contract with Showtime and his father and trainer would then like to see him retire. “After he fights this next fight, there isn’t anything for him,” Mayweather Snr said. “I think he still fights well enough to beat these guys but why keep fighting when you ain’t got to?

“I can’t call what he does because it’s his money and his mind and whatever he chooses to do is his own thing.” But he added, “I’d be very glad for it to be his last.”

As for the final opponent Floyd senior suggested, “A lot of people are talking about Amir Khan. I guess Amir Khan might be a good one.

“Khan jabs quite a bit and Khan does throw some combinations. I don’t know what the hell Manny be throwing.”

However Mayweather’s trainer noted, “I’ll tell you the honest truth, if it was me, my last fight, I would find me somebody I could sure enough beat up real bad. Somebody that ain’t going to cause me no hassle whatsoever.”

During the fight the trainer was urging his son to move forward and throw more punches, because if his concern about the judging. “You don’t never know what these people are going to do up here in their heads, with all the yelling and screaming when one man is doing something and when the other man is doing something it’s ‘boo,’” said Floyd snr.