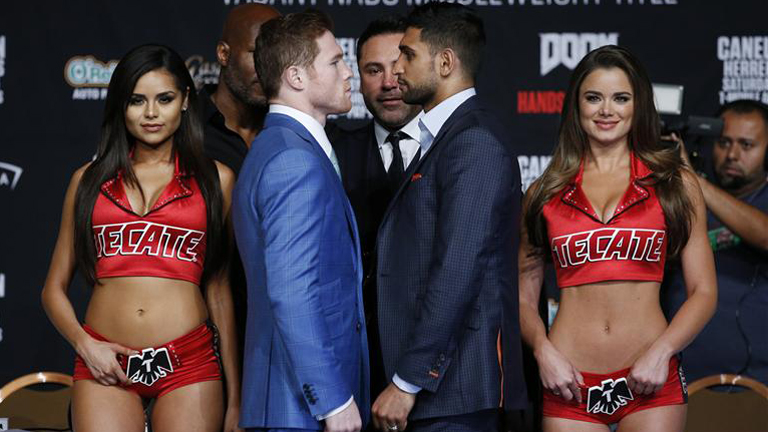 AMIR KHAN has been stopped twice, by smaller men than Canelo Alvarez.

Since the Englishman’s shocking first round loss to lightweight Breidis Prescott in 2008, critics have accused him of not being able to take a punch. When he was stopped in four rounds by Danny Garcia four years later, that criticism increased.

But according to former world heavyweight champion Lennox Lewis – who was stopped twice in his career – those defeats have made Khan stronger.

“Mentally, if you can come back from those sort of losses, it makes you stronger and he’s not been knocked out since [Garcia],” said Lewis, talking at the Las Vegas T-Mobile Arena where Khan will challenge Alvarez on Saturday night. “Absolutely he can take a punch. The first thing you hear when you get knocked down is you’ve got a suspect chin.”

Lewis endured similar criticism following his 1994 two-round loss to Oliver McCall and after being knocked out by Hasim Rahman in 2001. Both defeats were avenged yet Lewis understands the frustration of being labelled ‘chinny’.

In the past, Khan’s tendency to get involved has led to fights he was winning turn sour. Former world middleweight and light-heavyweight champion Bernard Hopkins – talking alongside Lewis – believes that bad habit will reappear against Alvarez.

“Amir can say he’s disciplined but he’s shown he can forget the plan when the going gets tough,” said Hopkins. “He will go back to the guy he is.”

“Amir is not going to be an easy guy to find in the ring,” reasoned Lewis. “Canelo is not used to a guy running around the ring… They [critics] say Khan goes flat-footed in the ninth round when they say he gets tired, but he’s got good enough footwork to stay away from it.

“Speed and weight are power. If you get the speed and the weight right, the power is there.

“Amir’s been waiting for this all his life. This is his time to take his place among the British boxing stars. This is the fight he wants.”

Lewis – an Olympic champion in 1988 – believes Khan’s sterling amateur background (he won an Olympic silver medal in 2004 aged just 17) is another advantage against the Mexican, who turned professional aged 15.

“Amir still has his amateur style,” said Lewis. “He took that into the professionals and he’s doing well with it. It’s a unique style. He throws piston-like punches. That really helps him in the pros. He’s firing on all guns and that’s an advantage for him.”

“Khan can’t afford to show he’s hurt. He has to fake it and look like he’s not hurt and keep Canelo off balance that way.”