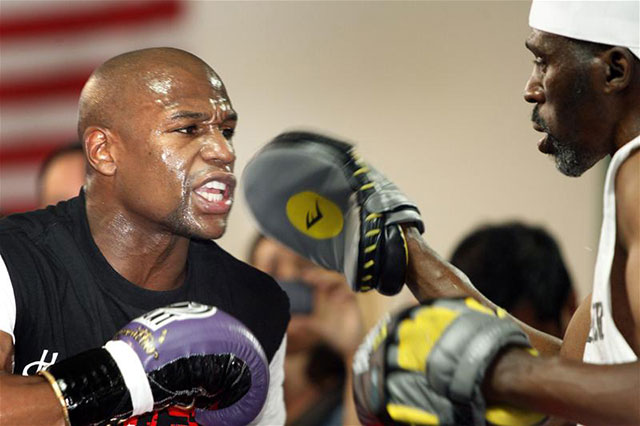 Amir Khan believes he is on a path to Floyd Mayweather, writes John Dennen, if he can get past Chris Algieri

FLOYD MAYWEATHER is expected, as usual, to fight in September. The timing of Ramadan this year means that Britain’s Amir Khan would be able to take a bout against him that month. “I’ve not ruled it out. It’s possible I could fight in September,” Khan said. “Ramadan is going to be a little bit earlier this year, so obviously it helps, gives me enough time to get the training done and everything. It can happen in September.

“There’s been the word there for the last couple years that that fight was going to happen. But I’m going to be taking every fight one step at a time, hopefully put on great performances. If that fight comes, obviously it’s something I’ve always wanted.”

He was impressed by Mayweather’s victory over Manny Pacquiao. “I was there as a boxing fan. I’m only an hour away from Vegas. I went there to watch the fight. I enjoyed the atmosphere and everything,” Amir said. “Mayweather looked great. He did what he had to do to win the fight. His accuracy was nothing but the best. He was catching Pacquiao with some good, clean shots, whereas Pacquiao was falling short.

“That’s the way he fights. He’s a very skillful fighter who is very patient and makes his opponent make mistakes. That’s what I liked about him.

“His world grade is dropping tremendously because of his age. But there are things I saw there which I have not seen before; when he takes a good shot, he doesn’t panic. The only way to catch him is with speed. Pacquiao didn’t use as much speed and explosiveness in the fight.

“I enjoyed it. I’m sure there were all those people who said he was never going to beat Pacquiao, well, he’s been there and done that.”

“I was getting a lot of respect in Vegas. But, like I said, this is time to fight Chris Algieri. I’m not going to be fighting Floyd Mayweather yet till I win this fight.”