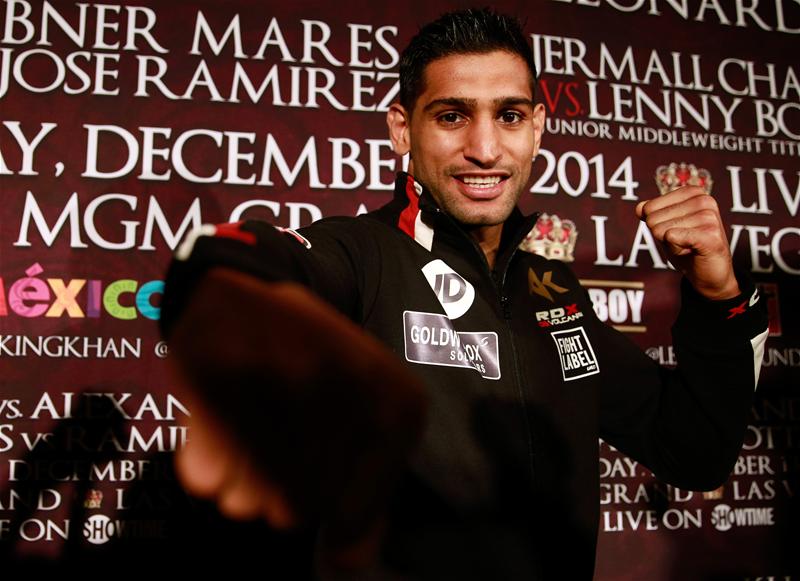 One eye on Mayweather, no pressure and the shorts will go to charity, says Amir Khan

AMIR KHAN says he is thriving in his role as Saturday’s headliner on Las Vegas as he prepares to fight Devon Alexander.

The two had been due to fight a year ago but Khan waited on a potential Floyd Mayweather fight and lost his championship contest with then IBF king Alexander.

“It’s more dangerous now,” Khan said of Saturday’s showpiece at the MGM Grand. “He’s got no titles and he knows this fight could take him to a superfight. Also, when he was a world champion a year ago when the fight was going to happen between us, when you’re winning fights you sometimes take your foot off the pedal and you think, you know what, this is easy. I’m always going to win the fights. You’re not as focused as you should be. Now he’s not a champion that focus is there because he will think he can’t afford to make any mistakes. We’re both in a similar position where if we win this fight it takes you to the next level. I’m not taking it lightly. It’s a massive fight for me and you’re going to see a very disciplined fight from me.”

Khan admitted the amount of media work he’s had to do was becoming frustrating, but he has gone about his press duties efficiently.

“There’s no pressure,” he said, of his role in Las Vegas. “It just gives me that extra drive to train and work hard.”

He said he sparred 10 rounds on his birthday earlier in the week and that he’s ready. He’s also been grateful for the extra time he’s had with trainer Virgil Hunter, and the early fights he had under his coach when their partnership started.

“People might say ‘Amir is fighting [Carlos] Molina or whatever and they might not be on the same level’ but you need learning fights,” he explained. “My career has been so fast. I’ve only just turned 28 and I’ve had 32 fights already – and I’ve been in with the biggest names in boxing and tough guys. But when you do get beat or you fight guys that you’re going to learn off, like Molina and [Julio] Diaz you learn so much off them it builds something in your mind that you can never take any fighter lightly. Before Diaz I thought ‘This was going to be an easy fight.’ He put me down with a left hook, which I still say wasn’t a good clean shot, my balance was off, but these are things I’m working on as I’m getting older and wiser.

“With most fighters they can never gel with a trainer in one-two fights. You need to be with one for three-four fights because it takes time to build that relationship and learn everything. After the Diaz fight people were saying, ‘Ah, you should  move from Virgil’ but I came back and had that great performance against [Luis] Collazo so it just shows that you need to spend some time with the trainer, you can’t just keep moving.”

Khan fielded questions about his ability to absorb punishment and believes Hunter has added to his skills so he will not be as open against Alexander.

“I think the shots I’ve been put down by and the shots I’ve been caught with have been big shots,” he admitted. “Whoever they hit, they would have gone down. But one thing about me is I get up. I may get put down but I get up again and the times I did get caught and was put down I was always off balance, lunging in with my chin in the air, had no defence. But with Virgil he’s given me positioning so I’m always in the right position and even if I do get hit with a shot or punch you’re not going to be off balance. Little things like that I have corrected and that’s made a massive difference.”

Khan also blamed making weight for going down in several fights and said he was weighing 151lbs on Wednesday. He has changed his diet and a chef has been preparing his meals.

He reckons he will be able to either outbox or outfight Alexander on Saturday but insisted once more that he is not looking ahead to the oft-talked Floyd Mayweather fight.

“After this fight definitely, I think a Mayweather fight makes sense but at the moment it’s Alexander,” he said. “That’s all I’m thinking about. Tunnel vision. In a way, I’m happy the Mayweather fight didn’t happen and I didn’t fight Alexander then [a year ago] because I was new at 147 and it got me to build at the weight and it’s given me time to spend in the gym and improve my style.

“Who else is there for Floyd? I want to keep busy. I’m 28. I’m at an age where I want to give it my all. I love the sport. I love every bit of it. Boxing has changed my life around and it’s put me in the position I’m in now. Without boxing I wouldn’t be here. I don’t know what I would do but I love it.”

Khan also said that he would be donating the shots from Saturday night, that cost £20,000 to make, to a good cause.

“I’m going to give the shorts to charity or something after the fight,” he said. “I’m not going to keep them, and the money raised will go to a good cause, so they will be used for something decent.”

GET THIS WEEK’S BOXING NEWS, established in 1909 and the longest running publication on the market FOR HUGE LAS VEGAS PREVIEW. SAVE MONEY and GET THE BEST COVERAGE EVERY WEEK.