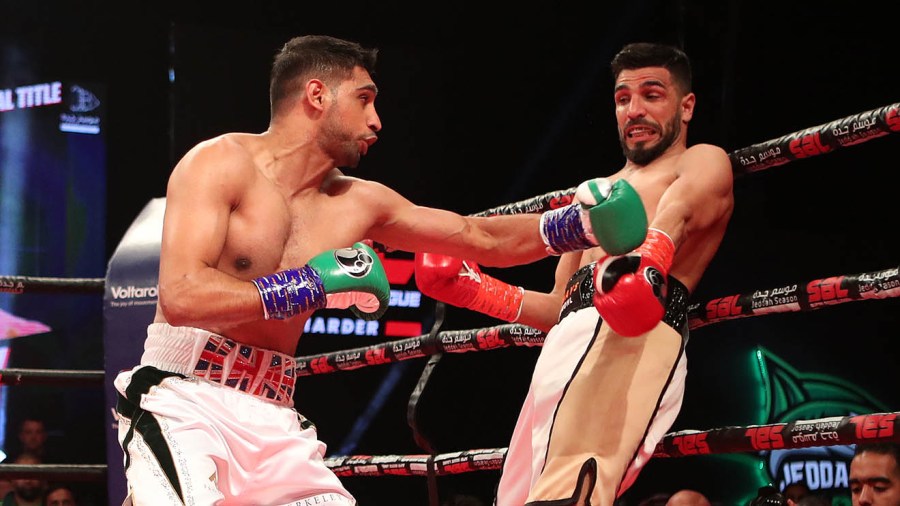 AMIR KHAN returned to winning ways in Saudi Arabia when he walloped a grotesquely overmatched Billy Dib into fourth round defeat to cap a beyond chaotic event inside Jeddah’s King Abdullah Sports City.

A knockdown in the second round highlighted the disparity in the pair’s fitness and size and, when Dib was decked again in the fourth, the Aussie’s corner wisely threw in the towel. In keeping with the fiasco, the towel was red and matched the colour of the canvas so referee Ian John Lewis failed to recognise it straight away.

Dib looked woefully out of his depth in the first round as he skedaddled away from Khan, taking a left and right that zipped from Khan’s shoulders and straight into the Aussie’s face. Dib – a career featherweight – hurled himself at the taller man in desperation and his whole body almost ended up on Khan’s shoulders. The sorry scene was set.

The 33-year-old Dib has been semi-retired since losing to Tevin Farmer in 2018 in a bid for a super-featherweight title, though he was at his best in the division below, where he held the IBF title from 2011 to 2013. That this bout came at welterweight – Dib’s walking-around-and-taking-life-easy weight though not his strip-down-to-the-waist-and-fight weight – was something of a joke.

There was some faith in Dib in the build-up, simply due to Khan’s obvious deterioration since he was knocked cold by Canelo Alvarez in 2016.

That faith all but disappeared in fight week when it became clear that Dib, pudgy with a just-happy-to-be-here outlook, was simply in no condition to fight at this level.

Dib’s mission moved into impossible territory in the second round. He made the schoolboy decision to lead with his left hook and leapt straight into a powerful counter left on the inside. Down he went. Clear-eyed, he rose at the referee’s count of eight and survived the round that appeared to end at the 2-42 mark.

Though Khan, 32, was in complete control, he was often off-target and over-zealous. His footwork was at times clumsy and his reliance on throwing multiple punches when out of range could be his undoing if he gets another world title shot. Fighters who rely on speed often encounter similar problems as they get older but, in Dib, he met someone who is closer to retirement than he is. The plan is now to match Khan with a belt-holder, which is all well and good, but one hopes the sport is spared another event like this one.

As recently as April 20, Khan was defeated by WBO welterweight champion and one of the very best in the game, Terence Crawford. On that night Khan exhibited obvious signs of decline but it was his surrender in the sixth, after taking a blow to the groin, that was the biggest indicator that the old warrior’s days at the top are numbered.

But Dib was simply not equipped to convince Khan that the end is nigh. Any punches he did land bounced off the Englishman as Amir found himself in the unusual position of being completely bulletproof. To his credit, his shots to the body were full of spite and he pinned Dib on the ropes in the fourth.

Even glancing blows were hurting the underdog and when Dib went down heavily from two rights and a left – only one downstairs appeared to land cleanly – the towel came in. John Lewis eventually realised the red rag was an act of surrender and called the whole thing off. It was the right decision, and something of a relief, but whether you could say the same about staging this whole thing is another matter entirely.

Don’t blame Khan for his part in it, his reported £7m payday is likely the best business of his long career, nor Dib for getting involved. The blame for this must lie with the matchmakers and the promoters who produced a show that highlighted boxing should be left to those who know what they’re doing. Whoever was responsible for this garbage clearly had no idea.

Topping the undercard was a diabolical excuse for heavyweight boxing as Hughie Fury stopped Samuel Peter in the seventh round when the Nigerian claimed he couldn’t continue with an injured left arm.

For six rounds, the veteran – supposedly only 38 – dutifully followed Fury while flinging wild punches that were, bar one right hand in the fifth, embarrassingly off target. Low blows hit the mark though and saw Peter lose a point.

Fury countered relatively effectively but did not look impressive before the ludicrous finish. Peter slammed two blows into Fury’s thigh, referee Ingo Barrabas stepped in and Peter flung another wayward right hand – not for the first time after the official called break – which clipped Barrabas’ nose. Peter then reeled away, claiming an injury to his left arm. At 2-07, the exhibition ended. A waste of time and, for those paying handsome wages to those involved in this show, surely a complete waste of money.

Britain’s Prince Patel lost his unbeaten record, and a fair amount of face when one considers his painful boasting down the years, after losing a wide decision to Venezuela’s Michell Banquez over 12 rounds.