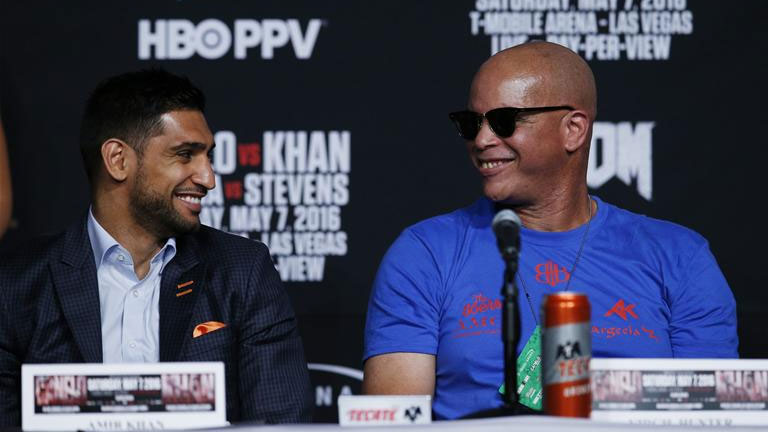 AMIR KHAN has never weighed more than 147lbs in a career that began at lightweight 11 years ago. The Englishman is confident that the freedom to rise to 155lbs to challenge Canelo Alvarez will make him a better, stronger fighter.

To prepare for the threat of Alvarez – who brings the WBC middleweight title to the Las Vegas Arena on Saturday – Khan has been sparring European champion Michel Soro, and IBF super-welterweight boss, Liam Smith.

“The sparring has been amazing. Michel Soro pushed me back, and I also had Liam Smith which was great sparring,” Khan revealed. “I want to thank them for pushing me.”

Some observers have pointed to Khan’s comparative inactivity as a problem. Khan has fought just three times in two years, the most recent coming in a tougher than expected win over Chris Algieri 11 months ago.

“I don’t think ring rust will be a factor,” Khan countered. “I’ve spent a lot of time in the gym training, improving my boxing skills and my ring generalship. I’ve been spending so much time in the gym with [trainer] Virgil [Hunter], that I’ve improved.”

Hunter – who also trains the likes of Andre Ward and Andre Berto – is relishing this opportunity too.

“It’s an honour to be beside Amir in this situation,” said Hunter. “A young man that’s been through so much adversity in his career, been counted out, criticised for his supposed weaknesses, but here he is, willing to step up two weight classes, and then some.

“To prove that he got into this sport to leave a legacy, to prove that he fears no one. I learned that real early about him. Most people who go through what he’s gone through get gun shy, but I was amazed, the first time I ever saw him spar, the attitude he had, man, I didn’t understand it.

“You’ve been through these situations it feels like you’d duck every time a punch comes at you but he’ll walk right into the face of adversity.

“It’s a pleasure for me to stand by his side in the face of obvious danger from a great fighter.”