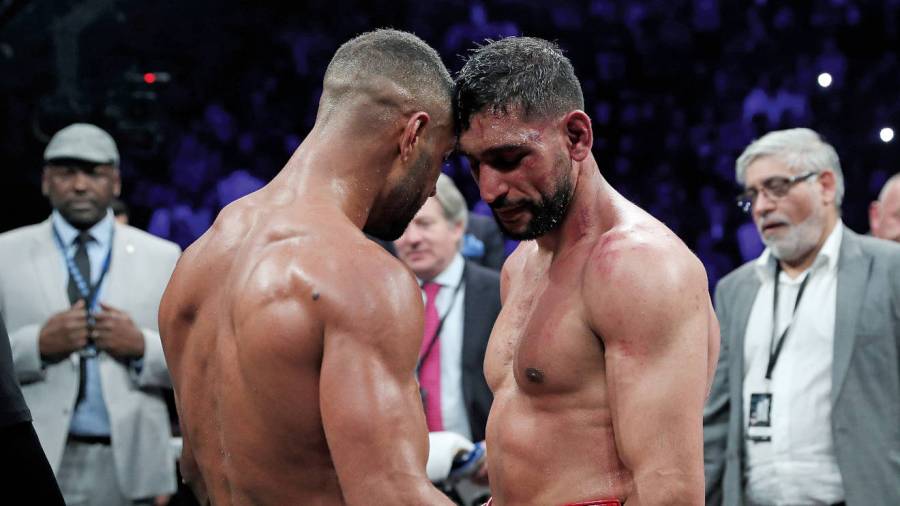 Amir Khan and Kell Brook show their class inside the ring and out, writes Matt Christie

AMIR KHAN walked into the post-fight press conference at the Manchester Arena and waited for his conqueror Kell Brook to finish his address. He took his seat behind the table and microphones but very much in front of the room. Yet again, even after enduring what must have been the most sobering pounding of his long and illustrious career, Khan – his swollen face stained with bruises – refused to shy away.

He has talked in-depth to the media about every fight, win or lose. Even after being taken to a Las Vegas hospital in 2016 following his hellacious one-punch KO loss to Canelo Álvarez, Khan called show promoter Oscar De La Hoya in the midst of the press conference to let him know he was okay and to pass on his thanks to the media for their support. The following morning he invited British reporters to his hotel suite where he earnestly reflected on the beating he’d taken only hours before. He would do the same three years later, after appearing to quit following a low blow from Terence Crawford.

Khan could have been forgiven for breaking the habit of a lifetime on Saturday night. This was not a loss he could rebound from, after all. Not a result he could promise to reverse. This was the fight, against bitter rival Kell Brook of all people, that told him his career was over. One in which he lost every round as punch after punch slammed into his head and body. The kind of full stop that every fighter must fear.

Not a single excuse, nor even a hint of one, was offered. “Training camp was one of the best training camps I’ve ever had,” he said. “It’s been a long career. I was at the [2004] Olympics when I was just 17. Perhaps I peaked too soon, I don’t know. But I am an old man now.

“I’m going to sit down with my family. I put them through so much every time I fight, I need to think of them now and make the right decision for all of us. When the time comes, I want to retire from boxing, I don’t want boxing to retire me.”

The 17-year-old boy wonder who became a household name overnight back in 2004 is now 35 years old. There were flashes of what he once was. There are nearly always those flashes of youth in ageing fighters trying turn back the clock. But the brevity of them is damning. This was the case again here.

None of that should take anything away from Brook, of course. He too has endured a long, punishing and successful journey as a professional boxer. He too had to contend with the rigours of age. On Saturday night, for one last time, Brook reminded us what a supreme talent he is. He now has the chance to make the perfect exit.

Do not underestimate nor downplay the courage both exhibited inside that ring on Saturday night. Neither could have known what awaited before the opening bell. The bravery was there afterwards, too. After so many years of peacocking and posturing, Brook and Khan showed only respect.

In truth, the fight came too late for both of them. After a victory this huge, the winner would ordinarily feel invincible and look ahead to what comes next. But even Brook, also 35, seemed to accept that his job was now done.

“I’m a fighter and I like the competition,” Brook said when asked if he would fight again. “I will always like being a fighter. But it’s the fighter who is always the last to say they’ve had enough. I don’t want to be one of those fighters who fights too long.”

As they embraced with genuine affection – the years of mudslinging forgotten in an instant – we got to see how beautiful this sport of boxing can be. The fight itself was exciting but increasingly difficult to watch because we can remember everything that came before. The punches thrown and taken, the broken hearts and bones, the triumphs and the tears. In the end – we hope – what happened in Manchester on February 19, 2022, was a fitting goodbye.